CHICAGO - A couple charged with killing a 22-year-old woman last month in her Belmont Cragin home is each claiming the other pulled the trigger, Cook County prosecutors said during a bond hearing in the bizarre case Thursday.

A co-worker who became concerned when Johnae McGowin didn’t show up for work on Feb. 10 went to her apartment in the 2600 block of North Laramie Avenue and found her dead from a single gunshot wound to the head, according to Assistant State’s Attorney James Murphy.

Lonesha Strong, 18, and her boyfriend, Marshawn Owens, 20, were arrested Tuesday and each charged with McGowin’s murder after detectives found Facebook messages and surveillance footage connecting them to her slaying, officials said.

Neither Strong nor Owens have a criminal record, according to prosecutors. 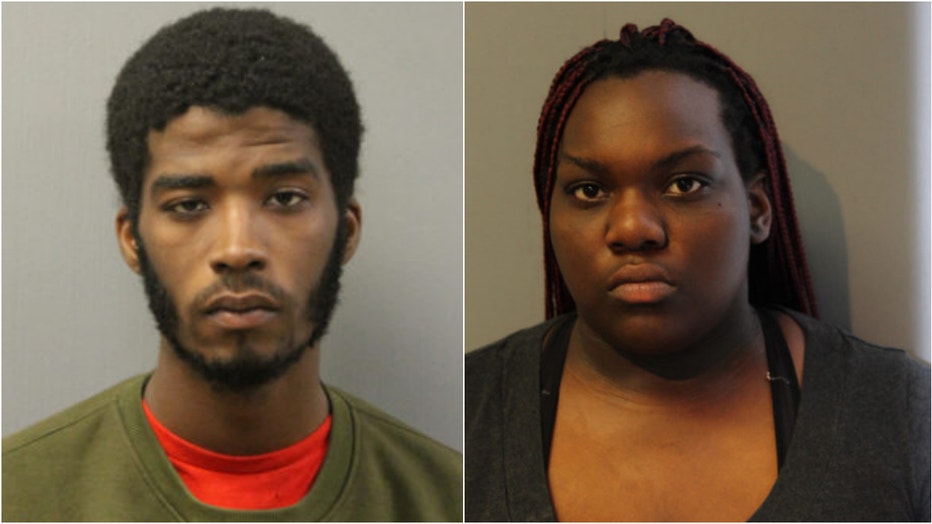 Owens went to the University of Illinois at Chicago for a year after graduating high school and has since worked multiple jobs, including at a Far South Side social services agency, an assistant public defender said.

Neither appear to have known McGowin before killing her, Murphy said.

Facebook messages allegedly show McGowin was first contacted by Owens a day before her death. Owens claimed he had gone to high school with her and the two exchanged "flirtatious messages" before McGowin sent Owens her address and a bus schedule, Murphy said.

Strong, who had access to Owens’ Facebook account, saw the messages he exchanged with McGowin and sent messages of her own, but McGowin did not reply, Murphy said.

Strong was then recorded getting off a bus near McGowin’s home about 6:40 a.m. the following morning and surveillance cameras recorded her meeting Owens at the door to McGowin’s building and both going inside together, Murphy said.

No one else was allegedly seen entering or leaving the building in the five minutes both were inside.

Once placed in custody, each gave video-recorded statements to detectives, though their claims differed over who was holding the gun when McGowin was shot, Murphy said.

Strong claimed that McGowin’s door was unlocked when she arrived and that she had found Owens and McGowin in bed together, Murphy said. As Strong argued with Owens, McGowin woke up and also became angry because she didn’t know Owens was in a relationship, Murphy said.

Strong allegedly said Owens had the gun and told her he was going to kill McGowin, but wanted Strong to pull the trigger, but she couldn’t do it. Instead, she claimed she prevented McGowin from leaving the home and that McGowin was on her knees when Owens shot her in the right temple, Murphy said.

Owens claimed he had told Strong where he was and that they argued when she showed up, waking McGowin, Murphy said.

After getting inside McGowin’s apartment, Owens claimed he was the one who stropped McGowin from leaving by holding her a gunpoint, Murphy said.

Strong told Owens he was on "clean up" and he put a blanket on the ground while Strong ordered McGowin onto her knees, Murphy said.

McGowin asked to call her sister and begged for her life, but Strong, who had taken possession of the gun, shot her once in the head, Murphy said.

"Regardless of which pulled the trigger, both are accountable," Murphy told Judge Kelly McCarthy.

The judge ordered both held without bail and set their next court dates for April 5.