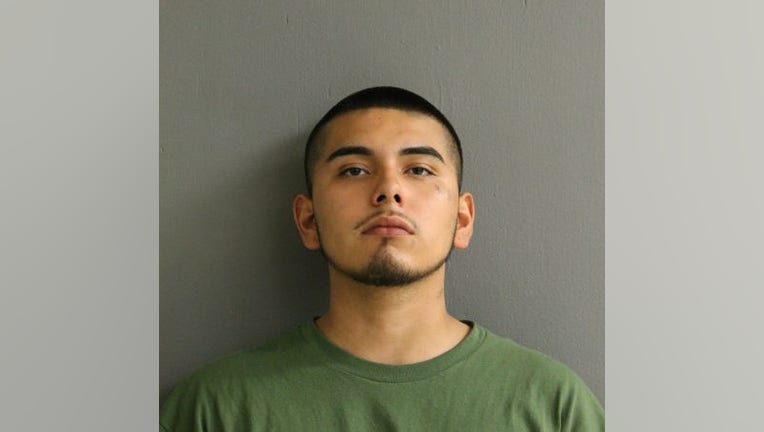 David C. Abarca, 22, is accused of pointing a fully automatic pistol with a laser sight at the officer on the inbound lanes near Ashland Avenue Thursday night, according to a police report.

Abarca was in the passenger seat and was not hit by gunfire. But a 24-year-old woman driving the car was shot in the head, according to the report. It’s unclear from the report whose gun shot her.

The woman was transported to Northwestern Memorial Hospital where she was listed in critical condition, the Illinois State Police said.

Abarca was taken into custody and charged with attempted murder, aggravated unlawful use of a weapon and aggravated discharge of a firearm, according to ISP. He appeared in court Sunday and is being held at Cook County Jail without bail.

The officer told authorities he was driving to work Thursday night when he got into an argument with the occupants of a blue Nissan Maxima on the Southwest Side.

There apparently was some "jockeying for position" as both cars got onto the Stevenson, a law enforcement source said. At some point, a passenger in the Nissan pointed a green laser light at the officer and there was an exchange of gunfire in the inbound lanes near Ashland Avenue.

Police Supt. David Brown told reporters the officer, who was not in uniform, returned gunfire after shots were fired at him. The officer then drove to "the closest police district," he said.

But Abarca’s lawyer said Monday that it was the officer who fired first. "I think the cop started it," said attorney Jospeh Lopez. "I know the cop fired first."

Lopez said it was his understanding, from his client’s initial court hearing, that a green laser was flashed from the Nissan but that the officer then "began firing because he thought the person was going to shoot at him. And the officer shot up the car."

It is against departmental policy for officers to shoot at or from a moving car. The Civilian Office of Police Accountability, which investigates use of force by Chicago police officers, was called to the scene of the shooting but has declined to provide any information.

The Civilian Office of Police Accountability, which investigates use of force by Chicago police officers, also declined to provide additional information.

The officer remains on active duty, and the only criminal charges filed so far are against a passenger in the other car who fired at the officer with a handgun illegally converted into a fully automatic weapon, according to the Illinois State Police.