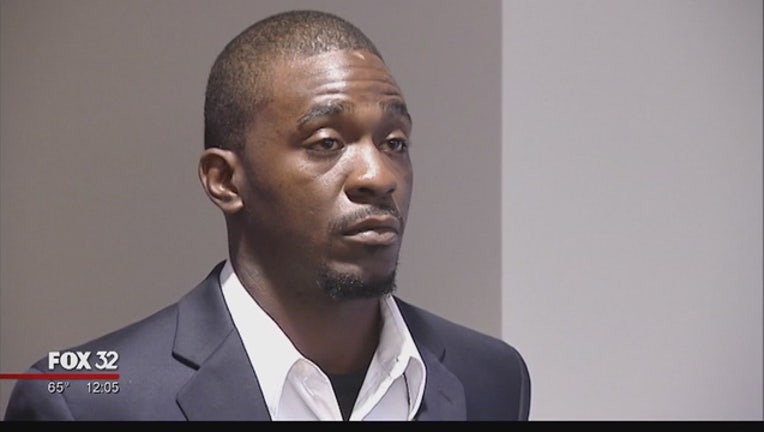 CHICAGO (Sun-Times Media Wire) - Moments after Dominiq Greer held a news conference Wednesday morning to announce a lawsuit seeking $15 million from the city — alleging a Chicago police officer wrongfully shot him seven times — police officers arrested Greer on a murder warrant as he waited for an Uber, the Chicago Sun-Times is reporting.

“I had no clue,” said Eugene Hollander, who hosted the 10 a.m. news conference at his Loop office. “It’s definitely a surprise to me. He was going to grab an Uber back home and as he was waiting a squad car pulled up.”

Greer, 26, a convicted felon, was arrested on a warrant for the May 27 shooting death of 22-year-old Kevin Larry, but has yet to be formally charged. The warrant was issued May 29.

Police found Larry dead after responding to a call of shots fired in the 5600 block of South Wabash, police spokeswoman Ana Pacheco said Wednesday afternoon. The victim in the shooting was a documented gang member, Pacheco added.

It’s the exact same block where two years earlier Greer’s good friend Brian Weekly was shot and killed after surviving two separate shootings in which he was wounded the previous month.

A police source confirmed that an “officer safety alert” was issued about Greer after the May 27 killing.

The alert, which also referred to Greer by an alias, “Domo,” said he was overheard saying he would “not be taken alive,” the source said.

“He should be considered armed and dangerous,” the alert said.

At the press conference Wednesday morning, Greer said he obtained a gun illegally to protect himself following Weekly’s death. He said he was carrying the gun but never pulled it, when police chased and shot him seven times — the basis of his lawsuit.

Greer displayed to reporters surveillance camera footage on a flatscreen TV as evidence to back up his claim that a Chicago police officer shot him multiple times in 2014 as he tried to run away and shot him again as he lay on the ground.

Greer, who told reporters Wednesday that he was not in a gang, said police should have gotten their exercise and chased him down instead of opening fire.

“They should have did their job and try to catch me instead of shooting me. If I ain’t never bring no harm to you, why would you bring harm to me,” said Greer hours after his attorney filed a lawsuit against the city and two police officers.

“I’m quite sure they do the training and run and know how to hold their breath, so that’s what they’re supposed to do anyway. They should have kept chasing me. I see if I turned around and posed a threat or anything to you, but I just tried to get away, if you had to shoot just for you to catch me, I don’t know what else to tell you. That’s bad.”

Under their current use of force policy, which is currently under review, the Independent Police Review Authority found the shooting justified last year and closed the case.

The shooting took place in the Englewood neighborhood in the early morning hours over the July 4 weekend of 2014.

Greer admits he was carrying an unregistered handgun at the time. He said didn’t normally carry a gun but got one because the shooting death of his close friend Weekly, which caused him to begin fearing for his life.

Greer said he never reached for the gun when police approached him and two friends as the group walked on the 7400 block of South Princeton. They were heading from the home of one friend who was on house arrest to the home of another friend, Greer said.

He ran a few steps before he was shot three times: in the right arm, right leg and left big toe. The video shows Greer stumbling and falling. Moments after he regained his feet and continued to run, a police officer enters the video with gun drawn.

Greer claims the same officer, Lawrence Cosban — a four year police veteran who is named in the lawsuit — shot Greer another four times from close range as Greer lay on the ground further down the alley — at which point he is a mere shadow on the black-and-white video.

“He was just standing around with two of his friends in the street, he sees the police roll up and he takes off. When you’re an African American in Englewood, it’s understandable,” Hollander said.

“I thought I was [going to] die,” Greer said Tuesday. “I asked them why they was shooting me like that so many times . . . they just stayed on their walkie talkies,” Greer said.

Greer spent eight days in Stroger Hospital after the shooting and was then transferred to Cook County Jail, where she stayed for seven months because he couldn’t afford bail. A charge of attempted murder of a police officer was eventually dropped, Hollander said. But an unlawful use of a weapon charge is still pending.

Video of the shooting, which was recorded by the surveillance camera of a private business, was not posted to a new IPRA website because evidence only from cases that are currently pending are posted to the site, IPRA spokeswoman Mia Sissac said Wednesday.

Greer said he moved to South Suburban Posen to get away from Chicago police.

“I try to stay away from them,” he said.  “My whole life I’ve been getting harassed, smacked around and everything by the police, so I’m just trying to stay away from them cause it seems like I can’t do nothing to them so if anything do come up I’m always going to be the bad guy even if I’m in the right.”

Greer has a conviction for a 2011 drug arrest. He also was convicted of domestic battery in 2013.