New York City Mayor Eric Adams invited himself to Mayor Lori Lightfoot’s City Hall office — and announced the trip before it was arranged on the Chicago end.

During a joint news conference after the private meeting, Adams credited Lightfoot as a mayor who "gets it," that is understands the need to focus simultaneously on "intervention and prevention."

"We have to turn off the faucet that is continually feeding the river of violence in our cities," Adams said, saying there is a "tint of racism" when "anything that happens outside of the Black and brown communities is defined as a crisis."

"By the time the police interacts with a young person with a gun, the system already failed," he said. "We call the police to do everything. We are now bringing in the idea of having community involvement and damning the rivers that feed the sea of violence in our cities." 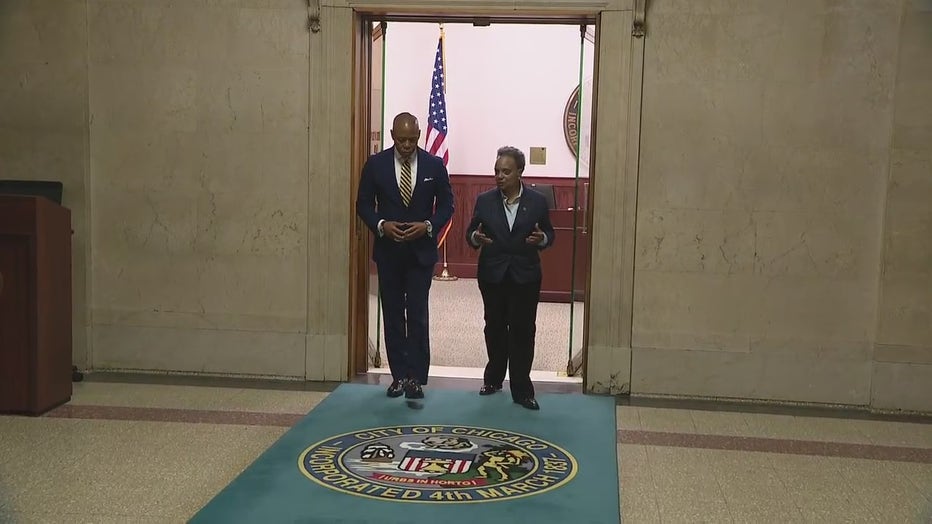 Lightfoot said she, too, is laser-focused on "stopping the pull of the souls of our young people to the streets."

"If a young person grows up in a neighborhood and doesn’t see and touch and can feel opportunity at their fingertips and believes that their only purpose in life — the only destiny that they have — is to mine somebody’s corner drug spot, that’s a fail for all of us," she said.

"We’re aligned on that. We’ve got to do more to make sure that we intervene in a pro-active way to provide support and love to these young people at the earliest possible stage in life," the mayor said.

Adams was asked what he can possibly learn from a city that has had roughly four times more homicides and five times more shootings than New York.

He responded by talking about Lightfoot’s decision to hold "local town halls to speak with grass-roots communities" about crime, and about Chicago’s recent decision to reduce "historical barriers" standing in the way of police hiring.

"We’re going to look to duplicate that in New York City," he said.

Chicago and New York are both struggling mightily to control a crime wave that has pretty much continued unabated since the pandemic and the demonstrations that devolved into civil unrest following the murder of George Floyd at the hands of Minneapolis police officers.

Both cities are struggling to fill a surge of vacancies from a tidal wave of police retirements. Meanwhile, police officers who remain on the job are increasingly hesitant for fear of being videotaped or disciplined.

A former police officer who rose to the rank of captain, Adams’ "Blueprint to End Gun Violence" has parallels to Lightfoot’s "whole of government approach."

Both mayors have branded their crime problems a public health crisis. Both rely heavily on expanded use of community-based "violence interrupters," including former gang members.

Like Lightfoot, Adams has also targeted bail reform and the steady pipeline of guns.

But Adams has stirred controversy in New York by proposing to bring back a softer, gentler version of the NYPD’s plainclothes anti-crime unit that played a major role during the stop-and-frisk era.

She and Police Supt. David Brown turned the page on a year that was Chicago’s most deadly in a quarter century by establishing a goal of 1.5 million "positive community interventions," triple the number in 2021, to foster trust in neighborhoods.

The Sun-Times reported earlier this week that the Illinois attorney general’s office has found so many problems with the program that it has urged the city’s lawyers to "suspend or at least pause" the effort, calling it "a quota system" that is "rife with significant downsides."

Adams said Friday that "lack of trust is real." It cannot be denied.

"Everything from the Rodney King case all the way down to the Eric Garner case — those are the professional things that we all viewed. But we also have the Eric Adams case. To be arrested and beat by police officers is something that’s embedded in just about every Black boy in our country," he said.

Former Chicago Police Supt. Garry McCarthy, who rose through the ranks of the NYPD, said he has no idea what Adams "expects to learn or what he expects to share" with Lightfoot.

"All I can tell you, I went to New York two weeks ago for a funeral and everybody there just is swearing that the wheels came off … The crime problem is skyrocketing, just like it is in Chicago," McCarthy said.

If there is an overriding and consistent crime fighting strategy in Chicago, McCarthy said he hasn’t seen it.

Brown appears to have a fluid strategy for fighting crime that’s based on what’s going on in front of him at the moment.

During Interim Supt. Charlie Beck’s brief tenure in Chicago, he ordered one of the most sweeping reorganizations in CPD history, putting hundreds of officers and detectives back in neighborhood districts.

With homicides, shootings and civil unrest surging, Brown reversed field and created large units that can be mobilized across the city. That approach stripped neighborhood police districts of four to six officers per watch to prevent more looting in the summer of 2020.

During his tenure at CPD, McCarthy said he learned first-hand how important it was to stick with his crime-fighting strategy, instead of reacting to every brutal headline.

"When I came in 2011, I broke up those big task forces and geographic accountability was given to beat officers across the city," McCarthy said.