A beloved Chicago musician survived a horrific car crash on her way home from a performance Saturday night outside Los Angeles.

CHICAGO - A beloved Chicago musician survived a horrific car crash on her way home from a performance Saturday night outside Los Angeles.

The accident happened shortly after 10 p.m. PST on Highway 110. Although the crash happened in California, the Chicago music community is now rallying around 38-year-old Chihsuan Yang, a Grammy-nominated violinist and longtime member of the renowned local group Chamber Blues.

"I was very excited about coming back as a touring musician, and then this happened," Yang said Monday from her hospital bed, where she is being treated for two fractures in her lower spine, among other injuries.

The crash happened on the eve of a banner day in Yang's music career. She composed and performed in a commercial that debuted during the broadcast of Sunday night's Emmy Awards: an achievement she was hoping to watch with loved ones, but instead had to watch from a hospital bed.

"To watch that in the hospital bed, all banged up and on morphine, it's just surreal," Yang said. 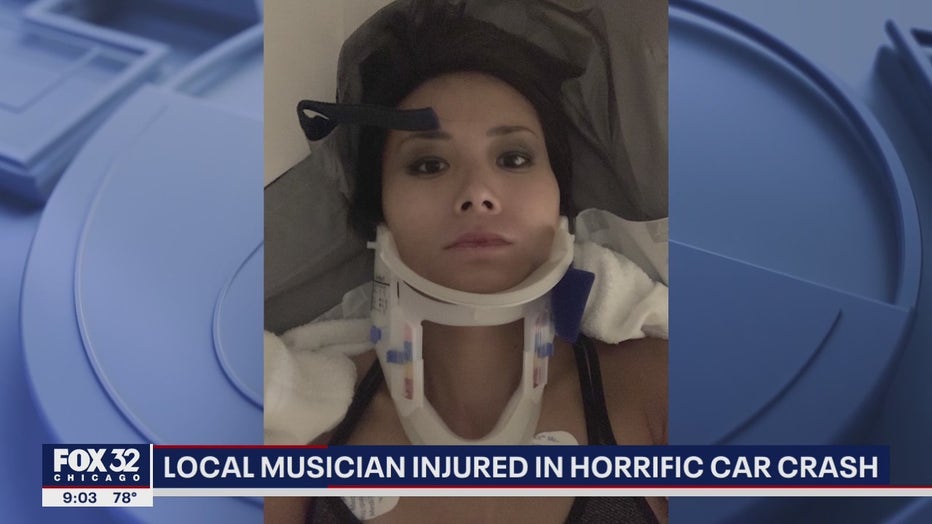 "Chihsuan is very rare, indeed," said Corky Siegel, founder and leader of Chamber Blues, who's been touring with Yang for 15 years. "Emotionally, it's a big 'whew,' because she's alive, and she's going to be ok, I believe."

Although the circumstances which led to the crash are still unknown, Yang said she was on the way home from a performance with her partner, Nikki, 32, and their 10-year-old daughter Ember, when a car going the opposite direction jumped the highway median and hit them head-on.

"The airbag popped and the first thing I remember was Ember screaming," said Yang.

All three survived, but are now hospitalized with severe injuries. Along with her spinal fractures, Yang suffered an injury in perhaps the worst possible place for a violinist. "My pinky is fractured," she said. "And that's significant for me because this is my livelihood."

Yang says she's thankful she and her loved ones are alive, and a GoFundMe campaign has been set up to help them in the coming months.

"She was relying on being able to begin to make a living and now that's not going to happen," Siegel said.

The crash comes in the wake of an already-difficult year for touring musicians, with live performances virtually shut down during most of the pandemic. Yang says while she's "stressed about the road ahead," she is trying to remain positive.

"Maybe the universe has a plan for me that I don't see right now," she said.

The GoFundMe campaign to help to help Chihsuan, Nikki and Ember can be found HERE.