CHICAGO - U.S. Navy Cmdr. Antonia "Toni" Miggins is no stranger to danger. She quite literally flies in the face of it.

At her rank, she’s one of only a few women naval flight officers — Black or other — who fly in one of the U.S. military’s highly capable electronic warfare aircrafts. (She was just promoted to commander last Friday.)

Miggins spends much of her time in the cockpit of an EA-18 Growler, affectionately nicknamed "Miggles." While she doesn’t fly the aircraft or fire weapons from it, she does ride in the second chair and takes control of top-secret military technology.

In her position, Miggins has the capabilities of controlling weapons systems, jamming enemy communications and aiding incoming U.S. forces in critical situations. 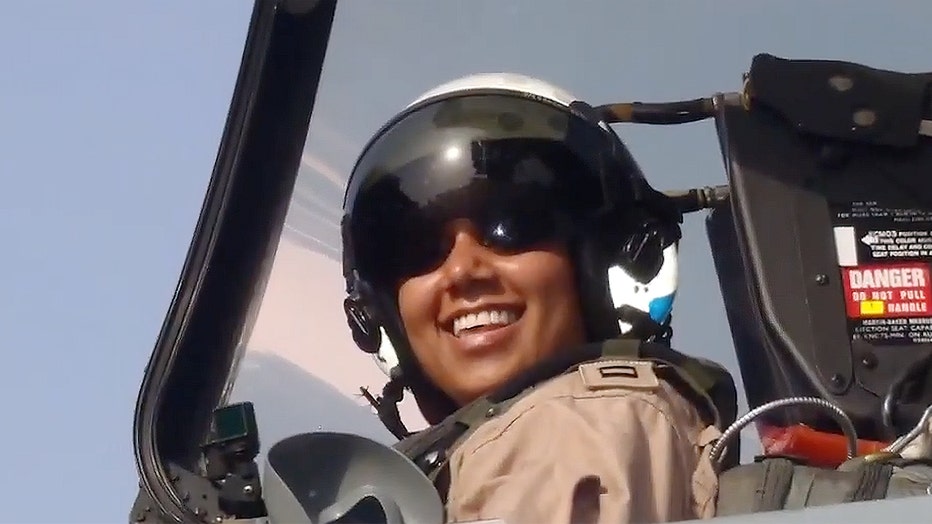 Antonia Miggins talked to Fox News in detail about her aviation career, including why she enlisted, how 9/11 cemented her commitment to this country — and what she's learned by being 24,000 feet in the air. ("Fox and Friends" screenshot)

"It is not a forgiving environment," Miggins said, explaining that she must always think 10 steps ahead of her aircraft.

"Being able to think ahead and be prepared for different situations that may come up is crucial to not only being successful but being safe."

The Navy commander has worked as an electronic warfare officer for nearly 2,000 flight hours during 20 combat missions in Iraq and Afghanistan in 2011.

It was in the Middle East where she had to put her sophistication and skill to the test in dangerous environments to help fellow troops on the ground out of life-or-death situations. Despite the high stakes, she’s found plenty of success.

"My mom took me to every air and water show every year on the beaches of Lake Michigan — and I've always been enamored with the Blue Angels."

"It really brings another level of realness to it … It's not necessarily easy to forget — but sometimes it happens when you're flying at 24,000 feet above — what's really going on [down] on the ground and being able to support that," Miggins said.

"Whenever you get those moments where everybody in the mission is counting on you, or just you're really focused on doing the job right, you definitely feel the heart pounding a little bit more."

It’s the rush of being thousands of feet above the ground that Miggins said she enjoyed the most.

Her first day of ROTC: ‘Shock’

She finds it hard to believe where life has brought her — though in hindsight, she said it all makes sense.

A Chicago native, Miggins said that, growing up, she had no personal connections to the Navy, but her love for aviation was abounding. It was fueled, in part, by her mother who used to take a young and impressionable Miggins to airshows. 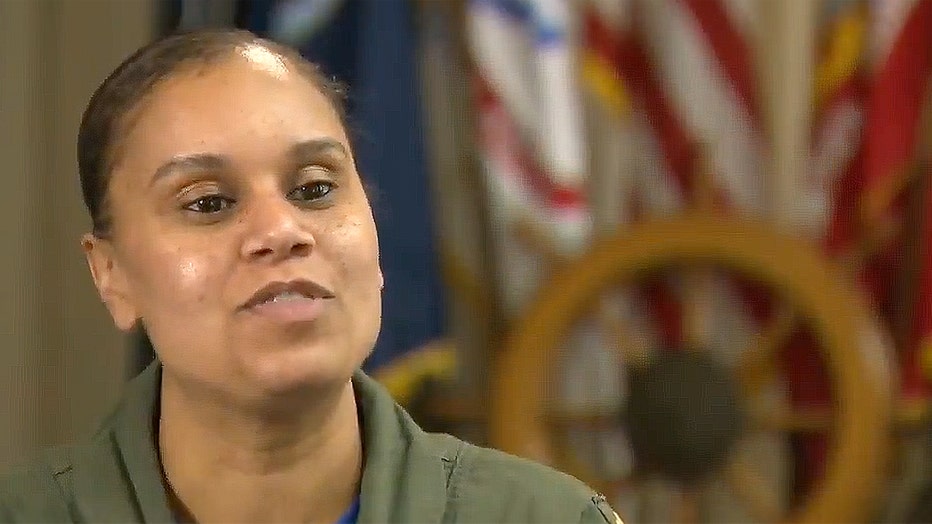 Antonia Miggins, a Chicago native and a U.S. Navy commander, talked to Fox News during Black History Month about her incredible career. "The Navy provides so many opportunities to everybody," she said. ("Fox and Friends" screenshot)

"My mom took me to every air and water show every year on the beaches of Lake Michigan, and I've always been enamored with the Blue Angels," she said.

Miggins knew she wanted to do something "fun and exciting" — but she didn’t know what until she joined JROTC in high school and saw the 1997 thriller "G.I. Jane." From that point on, she made up her mind to enlist.

Her path was all but carved out as she watched the world change before her eyes on Sept. 11, 2001, which coincidentally was her first day of ROTC during her freshman year at the University of Michigan. 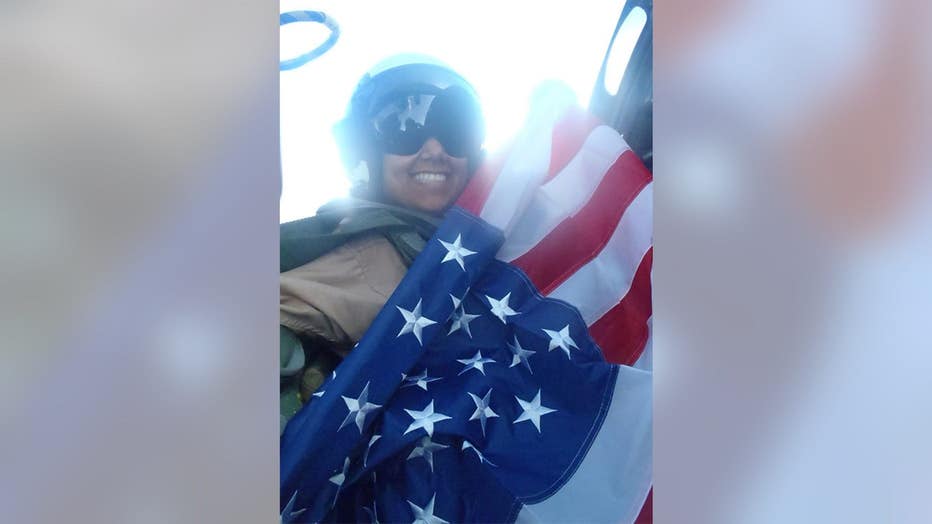 US Navy Cmdr. Miggins hard at work, in uniform and with the American flag. (Antonia Miggins)

"So when we find out on my first day of ROTC, my first day of college as a freshman, that this happened, it really was a shock," Miggins said as she explained how the terrorist attacks around the country further emboldened her to serve this country. "[it] just kind of overall, let me know that [enlisting] was just the right choice."

In 2005, she acted on that decision and joined the Navy at a time when there weren’t many women, certainly not in positions of power.

She went to flight school, quickly learning the difficulties of operating a military aircraft. Her lack of technical and aviation backgrounds almost certainly made her training more difficult — but Miggins said she was determined to make it through. 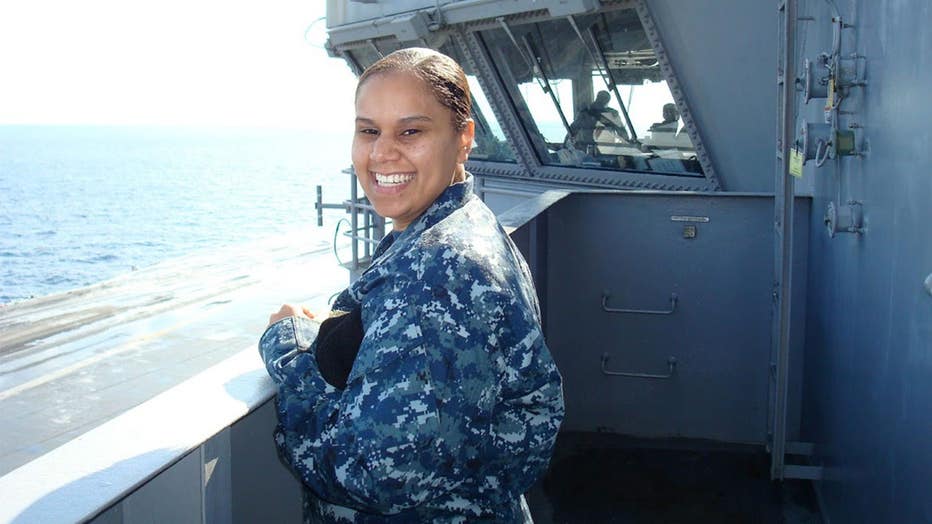 Antonia Miggins on Vulture's Row, overlooking the flight deck. "I have been very fortunate with my time and my experience," she said. (Antonia Miggins)

"It’s definitely a little bit harder when you don’t have that background as a foundation," she said. "That brought with it its own level of steep learning curve and challenges, and really just getting to know the type of community I was getting myself into. But it is not impossible. I hope I’m a testament to that."

In a man's world

She was essentially in a man’s world and became more of an anomaly — as a woman and person of color — as she rose up through the ranks of the Navy.

Seventeen years later, the landscape couldn’t be any different as the Navy welcomes a diverse new generation of servicemen and women. 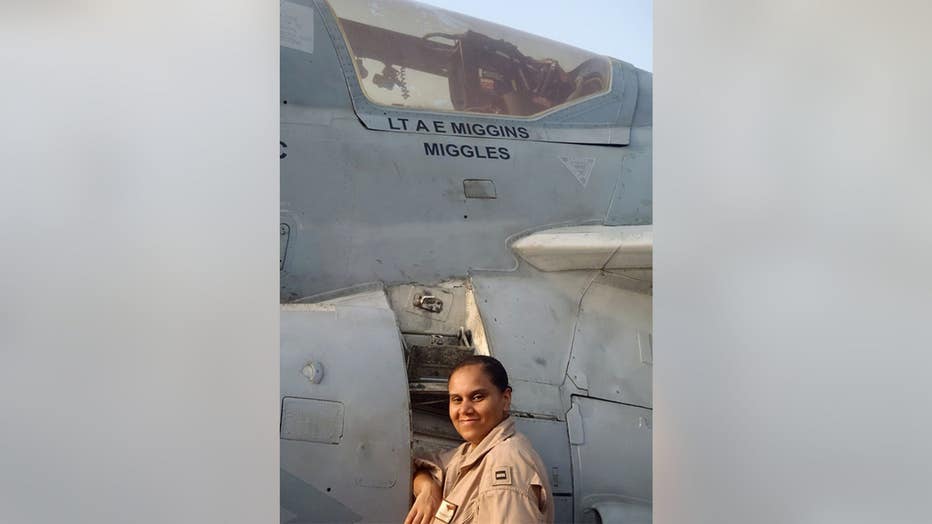 Antonia Miggins with "Miggles." "There are many more women now than there were when I was coming up," she told Fox News. (Antonia Miggins)

"Not every woman can be on every ship or on every aircraft, but now the population and percentage has increased greatly," she said. "It’s really exciting to see not only on our particular growler flight line, but also on flight lines across the country. It’s been really cool to see that increase in that diversity throughout the aviation community."

"If you really dig in and study and follow your dreams, anything is possible."

Miggins said she does not consider herself a trailblazer.

Instead, she said she looks at herself as an example for future generations of Americans who want to serve this country.

"The Navy provides so many opportunities to everybody. It’s a fair playing ground," she told Fox News.

"I have been very fortunate with my time and my experience that even without that background, even without aviation experience, that if you really kind of, dig in and study and follow your dreams, anything is possible," she said.