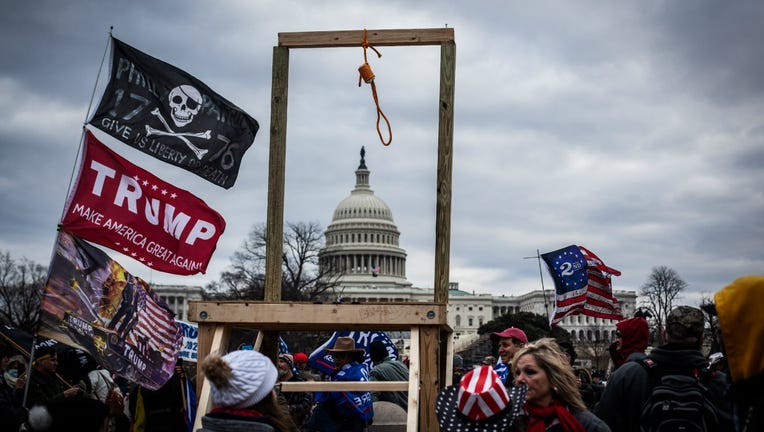 Trump supporters near the U.S Capitol, on January 06, 2021 in Washington, DC. The protesters stormed the historic building, breaking windows and clashing with police. Trump supporters had gathered in the nation's capital today to protest the ratifica (Shay Horse/NurPhoto via Getty Images)

CHICAGO - A Chicago real estate agent has been fired after posting on social media from the U.S. Capitol on Wednesday, her former employer announced.

Andrews acknowledged on social media that she took part in "Storming the Capitol," the company said.

"@properties does not condone violence, destruction or illegal activities," the statement read.

Andrews contended during a media interview that she had done nothing wrong and had not entered the Capitol. She said she climbed the steps of the building, posted selfies from the scene on Instagram, and sang the national anthem.

"I’m a 56-year-old woman, petite. I was not there causing trouble. I was there to support my president," she added, according to Reuters.

"I’m a 56-year-old woman, petite. I was not there causing trouble. I was there to support my president."

Andrews is one of a growing list of people accused of participating in the Capitol protest to be subsequently fired.

Earlier on Thursday, a Texas-based insurance agency, Goosehead Insurance, said it fired an employee who participated in the storming of the Capitol, in which an out-of-control mob entered the home of the Senate and House of Representatives.

Paul Davis, a lawyer at the Westlake, Texas-based agency, broadcast his participation at the Capitol on social media, saying he had been teargassed, the news organization reported.

The agency tweeted he was "no longer employed by Goosehead."

According to a memo to employees obtained by Bloomberg Law, Goosehead CEO and co-founder Mark Jones said the company was not aware of Davis’ plans to be part of the "violent demonstration."

"While we support our employees’ right to vote and express themselves politically, we do not condone violent or illegal acts. This one former employee’s actions are not reflective of our company culture or values, and we are disappointed with his behavior," Jones reportedly said in the Thursday morning message.

Meanwhile, a Maryland marketing firm on Thursday fired an employee who was photographed wearing the company badge while taking part in Wednesday's demonstrations.

Navistar Direct Marketing of Frederick wrote on Facebook Thursday that it was made aware that a man wearing the company’s badge was seen inside the Capitol during the unrest.

"While we support all employee’s right to peaceful, lawful exercise of free speech, any employee demonstrating dangerous conduct that endangers the health and safety of others will no longer have an employment opportunity with Navistar Direct Marketing," the firm wrote.