Another round of tumult took over a Chicago high school Thursday when students staged a protest over a video allegedly showing a now former school official grabbing a student’s face.

CHICAGO - Another round of tumult took over a Chicago high school Thursday when students staged a protest over a video allegedly showing a now former school official grabbing a student’s face.

The encounter brought followed already-existing turmoil over the sudden firing Friday of interim Principal John Thuet and Assistant Principal Michelle Brumfield, and the suspension of the boys basketball season. Chicago Public Schools recently appointed Gibbs to run the school, but she resigned Wednesday saying she wasn’t a good fit.

Students on Thursday staged a sit-in inside the school before rallying outside and marching around the school to protest Gibbs' conduct toward Muñoz and the removal of their administrators.

Muñoz described his encounter with Gibbs, which happened Tuesday morning when a security guard asked him why his ID wasn’t hung around his neck per school policy. Gibbs got involved to help Muñoz find a lanyard for his ID, he said.

“She reaches for my pocket and grabs my arm,” Muñoz recalled on Thursday. “Also, she tries snatching it, and I flinch. I pull away from it. I got nervous. And right after that she grabbed my face, and I freaked out, I was like, ‘I don’t appreciate being touched like this.’” 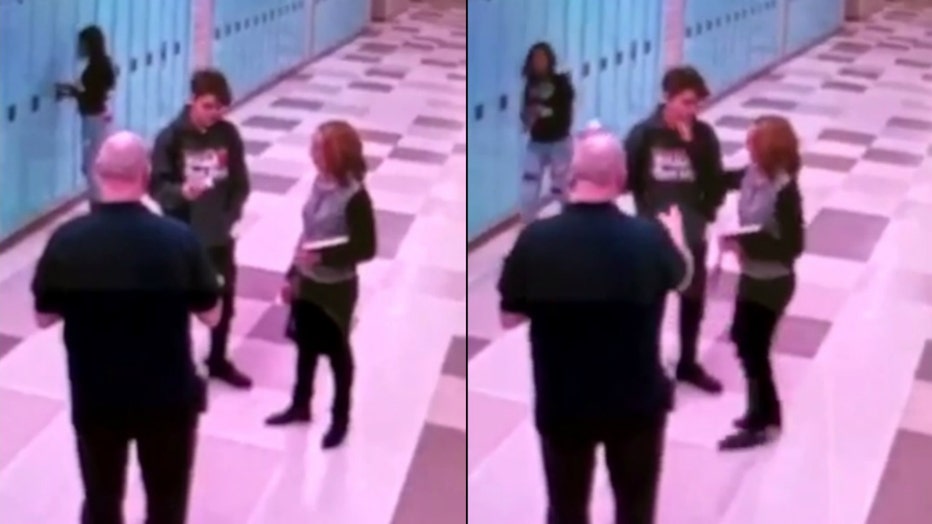 Gibbs immediately apologized after she grabbed Muñoz's face, he said, “but the shock had just gotten to me, I couldn’t just accept the apology right there.”

Ella Wong, one of the students who organized the protests, said her schoolmate’s interaction with Gibbs shows that she wasn’t the right person to lead the school.

“CPS put the wrong person in our school, and that’s a very big deal,” Wong said. “I hope it brings more attention to what the students are doing to show how much we need our administration back.”

Much of the tension between students and the school district stems from the lack of information being released by CPS about the high school administration’s ousting.

CPS officials at a meeting on Monday told families they had four investigations into the school over allegations that include multiple instances of sexual misconduct, retaliation against witnesses, lying to families and financial mismanagement of the athletics program.