A Chicago SWAT team member who helped pull a man from the frigid waters of Lake Michigan over the weekend said his adrenaline kicked in and he didn’t “think about the cold.”

CHICAGO - A Chicago SWAT team member who helped pull a man from the frigid waters of Lake Michigan over the weekend said his adrenaline kicked in and he didn’t “think about the cold.”

The 22-year-old fell into the lake about 7 a.m. Saturday near Ohio Street and was spotted by someone in the 25th floor of a nearby hotel who called 911, police said. Fire crews arrived first, couldn’t find anyone from their vantage point.

It wasn’t until two SWAT officers on patrol in the area went down near the water and spotted the man.

“With the amount of ice, it was jagged ice … you could barely see him,” SWAT officer Shane Coleman said Wednesday in a news conference. “We saw his head and shoulders were completely submerged.”

Coleman got on the ground and grabbed the man by his torso, forming a human chain with his partner, Peter Jonas.

“I was able to reach around with one arm, grab the back of his pants around his belt line, and we were able to drag him out,” he said.

The man was taken to Northwestern Memorial Hospital and has been released, police said.

Coleman said the man wouldn’t likely have been rescued if someone hadn’t spotted him first and called 911.

Pulling people from the lake isn’t in the job description, but that any other officer in his position would’ve done the same thing, he said.

“When you see a guy bobbing in the water, adrenaline kicks in. You don’t think about the cold or the rocky ice,” Coleman said. “It was less thinking and more doing.”

The officers were each nominated by their supervisor for the department’s life saving award. 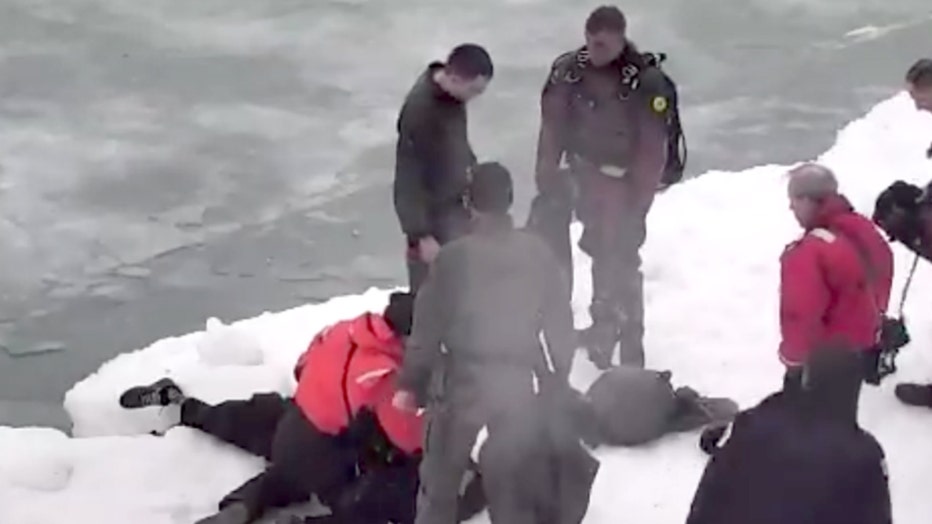 A 22-year-old man was taken to Northwestern Memorial Hospital in critical condition after being pulled from Lake Michigan Feb. 15, 2020, near the 600 block of North Lake Shore Drive. | Chicago police