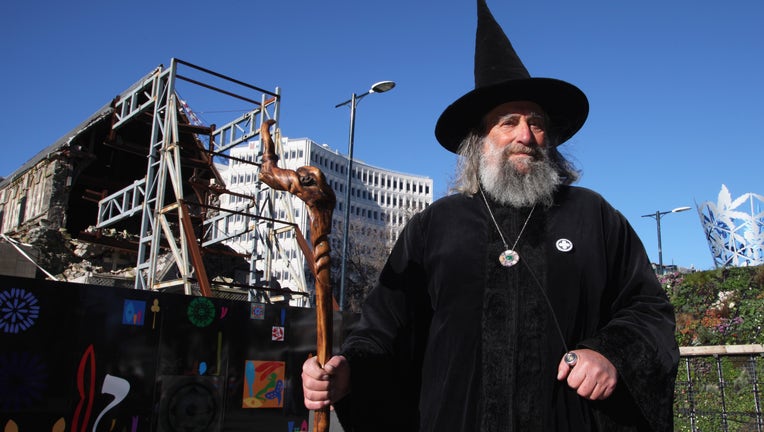 Ian Brackenbury Channell, 87, a former professor at the University of New South Wales in Sydney, has been a regular fixture in Christchurch since the 1970s, when he first moved there from the United Kingdom. Channell even has his own TripAdvisor page with overall positive ratings.

"I've invented a wizard out of nowhere," Channell told CNN. "There were no wizards when I arrived in the world, except in books."

According to a city spokesperson, Channell is paid 16,000 New Zealand dollars (around $10,400) annually.

The New Zealand Art Gallery Directors Association acknowledged Channell in 1982 as a “a living work of art,” describing the wizard as “a performer and a public speaker, who is notable for reviving the ancient art of rhetoric and was most often seen in The Square in Christchurch synthesising the ideas of famous philosophers.”

Channell said that in 1988 he was asked by officials of Waimate, a small town just outside of Christchurch, to perform a rain dance to combat a drought that was occurring in the area. Channell claims that within a few hours of the ritual, heavy rainfall began.

“The Wizard adjourned to the refreshment tent to watch the downpour and partake of the free whiskeys that were thrust into his hands by the visibly shaken farmers. The weatherman on the national TV News that night began his description of the day’s weather with the phrase ‘You’re not going to believe this, but…'” Channell's website reads.

Channell’s website contains a large library of personal accounts, with local news coverage to back up his various mystical deeds. Channell’s magical reputation has won him recognition by some of New Zealand’s most prominent officials — and even the queen of England.

In 2009, local New Zealand news outlet Newshub reported that Channell was recognized for that years’ Queen’s Birthday Honors. "It's lovely to see an award given for someone who has lived essentially a life of putting as much fun as possible into the world and as much thought as possible," Channell said.

Currently, the most likely candidate to replace Channell is his apprentice, Ari Freeman, who has been learning the skills of the wizarding trade for the past six years.

"I want the wizard phenomenon to continue, and I will totally fulfill that role," Freeman told CNN.

Freeman currently teaches music and performs in a psychedelic funk band, but when he’s not performing for a live audience, he can be seen wandering in robes with his teacher, staff in hand.