Clarendon Hills residents concerned their city may have to share firetruck

Some community members are upset at the thought that the Clarendon Hills Fire Department wouldn’t have its own ladder truck, fearing response times would be longer.

CLARENDON HILLS, Ill. - Leaders in one suburb are looking to share a fire department ladder truck with another community, saving a big chunk of change.

Community members, however, say it's a safety issue.

A village leader in Clarendon Hills says that obviously public safety comes first, but if they can get by with sharing a ladder truck with a neighboring community, then why not save that money?

Some community members are upset at the thought that the Clarendon Hills Fire Department wouldn’t have its own ladder truck, fearing response times would be longer.

They have organized, and there is a Change.org petition as well as yard signs being put up. 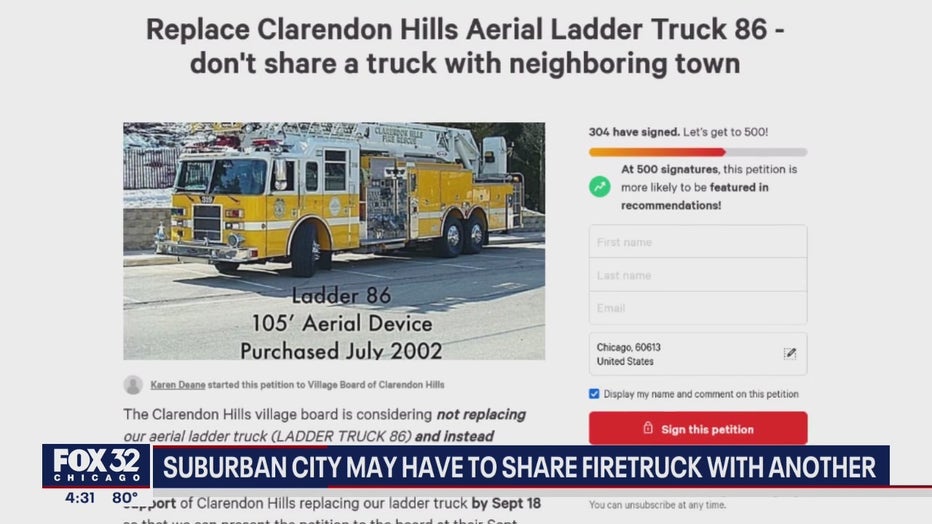 The issue at hand is the current ladder truck is getting old and needs to be replaced. The cost is well over a million dollars.

The village manager says they are still researching their options to replace it or rely on another department when they need the ladder truck.

"Big concern of delayed response time. If we're waiting for an aerial truck to come from Hinsdale, which is twice as big as our town, what if their truck is busy? Or even if it isn't busy, every minute counts when you're trying to get somebody rescued off of a second floor or a school," said Clarendon Hills resident Karen Deane.

There is a village board meeting Monday night. The ladder is not on the agenda, but they are expecting some public comment.

The village manager says they have a lot more to research before they make a decision.

FOX 32 reached out to the fire chief who says he is not allowed to make any comments.