CHICAGO - Former Presidents Bill Clinton and George W. Bush paid a visit to a Ukrainian Village church earlier this week to stand in solidarity with the people of Ukraine.

The flowers came with the message "in solidarity," and were wrapped in blue and yellow ribbons representing "the struggle for freedom," according to the video.

The visit from Bush and Clinton came without any media notice or neighborhood fanfare. Video shows the two place the flowers and pause for a moment of reflection.

The Ukrainian Village church has been the site of a number of rallies and gatherings since Russian soldiers invaded the eastern European nation nearly a month ago.

Chicago is home to one of the United States’ largest Ukrainian populations, with about 54,000 people of Ukrainian heritage living in the Chicago area, according to the U.S. Census. 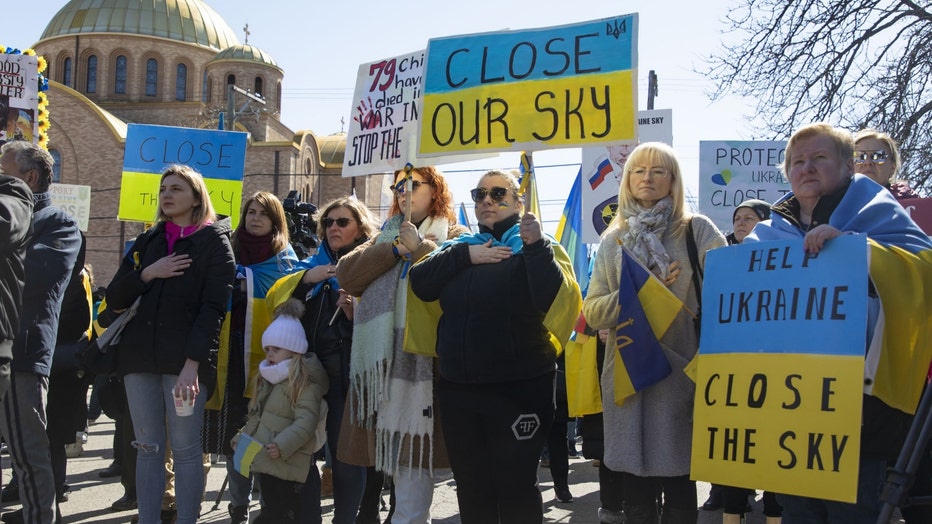 Demonstrators in Chicago gather in support of Ukraine in their war against Russia on March 13, 2022, outside Sts. Volodymyr and Olha Ukrainian Catholic Church in the Ukrainian Village. (Brian Cassella/Chicago Tribune/Tribune News Service via Getty Images / Getty Images)

Chicago is also a sister city with the Ukrainian capital of Kyiv, as noted in Clinton’s video, which emphasized a bipartisan call for "Americans to stand with Ukraine."