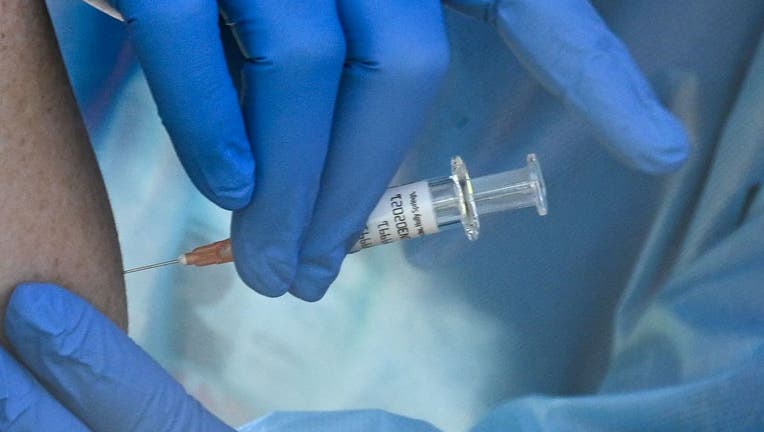 A flu vaccine is administered at a walk-up Covid-19 testing site, November 24, 2020, in San Fernando, California, just northeast of the city of Los Angeles. (Photo by Robyn Beck / AFP) (Photo by ROBYN BECK/AFP via Getty Images)

A coronavirus vaccine will begin to become available in the United States "probably by the end of the second week in December," Centers for Disease Control and Prevention (CDC) Director Robert Redfield told Fox News Tuesday.

Redfield told "The Daily Briefing" that a vaccine would initially be made available "in a hierarchical way" with priority going to "nursing home residents and then some combination of health care providers and individuals at high risk for a poor outcome."

The Food and Drug Administration (FDA) has scheduled a Dec. 10 meeting of its Vaccines and Related Biological Products Advisory Committee to discuss Pfizer's request for emergency use authorization (EUA) of its vaccine candidate.

Last week, Pfizer and German partner BioNTech announced that their vaccine candidate is 95% effective against COVID-19 in a large, ongoing study. The FDA can grant an EUA before the final testing is fully complete.

"I do think we'll have about 40 million doses of vaccine before the end of the ... year," Redfield told host Dana Perino. "That's enough to vaccinate 20 million people. But then it will continue through January and February and hopefully by March we'll start to see vaccine available for the general public."

In addition to the Pfizer/BioNTech candidate, potential vaccines from Massachusetts-based Moderna and British-Swedish giant AstraZeneca have also shown promise. Last week, Moderna announced its vaccine was 94.5% effective and it intended to submit an EUA request to the FDA "in the coming weeks."

On Monday, AstraZeneca announced that its vaccine was up to 90% effective against the virus.

Redfield warned Perino that while "it's exceptional that we have these vaccines and very exciting," Americans should still practice the precautions recommended by health officials.

"I want people to be vigilant because we're turning the corner now," he said. "You don't want to be the last group to end up getting COVID."

Redfield added that the surge of cases and hospitalizations across the U.S. is being driven by what he called "the silent epidemic, the asymptomatic infections largely in individuals between the ages of 12 and 35."