Researchers analyzing preliminary data of a recently discovered COVID-19 mutation identified in both South Africa and Brazil say the new variant exhibits a higher possibility for reinfection as well as evasion of immune responses.

According to a study focusing on Manaus, the largest city in the Amazon region in northern Brazil, several new mutations of the COVID-19 virus were discovered in samples taken between Dec. 15-23.

"These findings indicate local transmission and possibly recent increase in the frequency of a new lineage from the Amazon region," study authors wrote.

Researchers explained that the new variant was identified circulating throughout Brazil and had been detected in a case of reinfection in Salvador, a city over 3,000 miles south of Manaus.

The identification of the new and highly-transmissible variant of the deadly coronavirus in Manaus was also the subject of a separate study published in Science Magazine.

According to the report, the new variant carries a mutation identical to the newly-discovered U.K. strain but likely arose in a virus strain already present in the United States.

Scientists were already in the know that this virus would potentially mutate just because of the shear volume of people that have been infected all at once.

"The concern is the virus is now adapting to avoid our immune responses," said Dr. Stuart Ray, a professor who works in the Department of Medicine in the infectious diseases division at Johns Hopkins University. "Unfortunately we've had a lot of people in the United States and other countries get infected and be infected all at once while we're introducing a vaccine. If you had to think of a way to make a vaccine fail, this would be the way you'd do it. You get lots and lots of people infected with the virus that can change a lot and you expose them to a new stimulus that can drive the evolution of the virus to avoid it."

Manaus was particularly hard-hit by the virus and "experienced one of the world’s most rapidly growing COVID-19 epidemics, with the Amazon being the worst hit region," according to the study.

"The first SARS-CoV-2 case in Manaus was confirmed on 13th March 2020 and was followed by an explosive epidemic, peaking in early May with 4.5-fold excess mortality," researchers wrote. 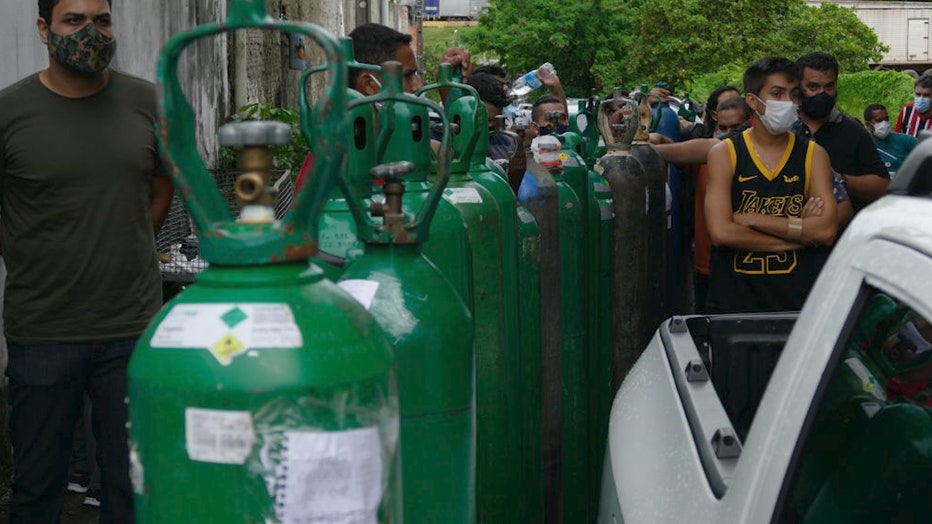 FILE - People queue up to buy oxygen at an oxygen factory in Manaus of Amazonas, Brazil, amid a second surge of coronavirus cases on Jan. 15, 2021.

The explosion of infections and high mortality rates within the region were followed by a drastic drop in cases, according to the study. Researchers speculated that the drop was due to antibodies being developed within recovered patients.

"Our data show that more than 70% of the population has been infected in Manaus approximately seven months after the virus first arrived in the city. This is above the theoretical herd immunity threshold," study authors wrote.

But now, the region is dealing with a second surge in COVID-19 cases and deaths, and it is believed to be caused by one of the new virus strains.Similar to the more easily transmissible coronavirus variant first detected in the United Kingdom, B.1.1.7, Brazil’s variant of the virus is causing worry among scientists because it has learned to evade the natural human immune response as well as any monoclonal antibodies developed after being infected with the original novel coronavirus strain.

"Such ‘immune escapes’ could mean more people who have had COVID-19 remain susceptible to reinfection, and that proven vaccines may, at some point, need an update," according to Science Magazine.

"The ability to reinfect people is something we should respect partly because there’s some folks who’ve had COVID and think, ‘I’m protected.’ And what this (study) suggests is that’s really not bulletproof protection," Ray said.

Brazil’s variant is called 501Y.V2, which is the same variant detected in South Africa.

"Some of the mutations it carries, including ones named E484K and K417N, change its surface protein, spike, and have been shown in the lab to reduce how well monoclonal antibodies combat the virus," the study said.

Despite the potential new threat to treatment, scientists say more research needs to be done to figure out what exactly the new variants are capable of.

Authors of a paper published in bioRXiv said "the speed and scope of 501Y.V2 mediated immune escape from pre-existing neutralizing antibodies highlight the urgent requirement for rapidly adaptable vaccine design platforms, and the need to identify less mutable viral targets for incorporation into future immunogens."

According to health experts, altering current vaccines in order to better fight off mutated variants of the coronavirus is not impossible. In fact, the flu shot recipe is altered every couple of years to help combat any mutations the flu may have developed.

The coronavirus vaccine would be no different.

"I don’t think people should hear a message that all is lost," Ray said. "I don’t think we have any evidence that the vaccine is useless. We may have to retool the vaccine. But I think what people should be hearing is, it’s really a dangerous situation we’re dealing with, that we have the tools like masking and distancing and reducing crowded places, that seem to work."

On Friday, U.K Prime Minister Boris Johnson announced that one of the virus variants which was first reported in southeast England, and has since spread to the United States and surrounding countries, has shown evidence of being potentially more deadly.

"Since the beginning of this pandemic, we’ve tried to update you as soon as possible about changes in the scientific data or the analysis," Johnson said. "So I must tell you this afternoon that we’ve been informed today that in addition to spreading more quickly, it also now appears that there is some evidence that the new variant, the variant that was first identified in London and the southeast, may be associated with a higher degree of mortality."

Johnson did confirm that both vaccines that are currently being circulated throughout the U.K., Oxford-AstraZeneca and Pfizer, are still effective against this new variant.

Ray explained why the new variants could cause the potential for an increased death toll and hoped this new information will spark a sense or urgency for widespread awareness of these new strains and the importance of following health guidelines.

"The other question is, is the death rate higher with these new variants? And I think there’s two aspects of that. There is some early evidence from the U.K. that maybe, the case/fatality rate is higher with these new variants than previously. That data needs to cook a little longer before we can be confident of it. But what I am confident of is that if a lot more people are getting infected, then more people are going to die. Even if the death rate is not very high for some age groups, it’s not zero either. And so if we have thousands of extra people getting infected because the virus is more infectious, then we’re going to see more deaths."

Ray stated that this message needs to invoke a "functional fear."

"The message we should hear is, things that should generate functional fear, that we should be masking, distancing and reducing large gatherings" Ray added.