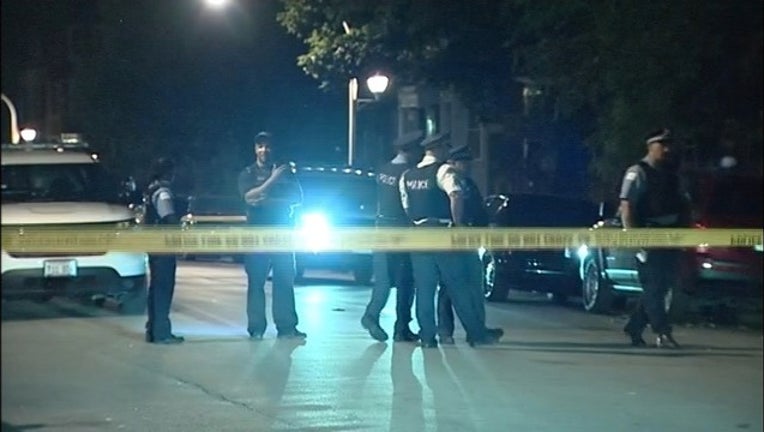 A man was seriously wounded in a shooting late Tuesday in the Washington Park neighborhood on the South Side. | Network Video Productions

CHICAGO (SUN TIMES MEDIA WIRE) - One man was killed and at least eight other people were wounded in shootings Tuesday across Chicago, according to police.

The 22-year-old man was shot to death about 7 p.m. in the Back of the Yards neighborhood on the South Side, police said.

Steven Edwards was outside near a gangway in the 4800 block of South Laflin when a gray car pulled up, and someone got out and shot him in the head, according to Chicago Police and the Cook County medical examiner’s office.

Edwards, who lived on the same block as the shooting, was pronounced dead at the scene at 7:12 p.m., the medical examiner’s office said.

The shooter got back in the car and took off westbound on 48th Street, police said.

Most recently, a 23-year-old man was shot and seriously wounded in the Washington Park neighborhood on the South Side. He was standing on a front porch about 11:20 p.m. in the 5600 block of South Wabash when someone in a vehicle nearby opened fire, police said. The man was shot in the lower abdomen, neck and legs and was taken in serious condition to Stroger Hospital.

About two hours earlier, a 29-year-old man was shot in the West Englewood neighborhood on the South Side. He was on a rear porch of a building in the 6900 block of South Throop about 9:30 p.m. when a male in an alley shot him in both legs, police said. The man was taken to Advocate Christ Medical Center in Oak Lawn, where his condition stabilized.

Ten minutes earlier, a 16-year-old boy was wounded in a Little Village neighborhood drive-by shooting on the Southwest Side. The teenager was standing on the sidewalk in the 2300 block of South Whipple about 9:20 p.m. when someone in a passing black car fired shots in his direction, according to police. He suffered multiple gunshot wounds to the back and was taken to Mount Sinai Hospital, where his condition was stabilized.

At 2:27 p.m., a 50-year-old man was shot in the abdomen in the West Garfield Park neighborhood’s 4300 block of West Jackson, police said. He was taken in serious condition to Mount Sinai Hospital. Addition information was not available.

About 12 hours earlier, a man was shot and critically wounded in the West Side Austin neighborhood. The 35-year-old was standing on the sidewalk about 3:40 a.m. in the 4900 block of West Huron when two males walked up, one of whom pulled out a gun and opened fire, police said. The man was shot in the chest and right arm and was taken in critical condition to Mount Sinai Hospital.

Earlier Tuesday morning, a 41-year-old man walked into a hospital after he was shot in the Belmont Gardens neighborhood on the Northwest Side. He walked into Community First Medical Center about 2:45 a.m. with a gunshot wound to the neck, police said. His condition was stabilized. The man told investigators he was sitting in the driver’s seat of a parked vehicle in the 4400 block of West Altgeld when someone in a white car nearby opened fire.

About 15 minutes before that, a man was seriously wounded in a shooting in another Austin neighborhood attack. The 33-year-old was standing on the street in the 1100 block of North Leclaire about 2:30 a.m. when someone walked up and fired shots at him, police said. He was shot in the left leg and took himself to West Suburban Medical Center in Oak Park. He was transferred to Stroger Hospital in serious condition.

Tuesday’s first shooting happened about 1:45 a.m. in the West Garfield Park neighborhood on the West Side. A 21-year-old man was standing on a front porch in the 4300 block of West Wilcox when he heard gunfire and realized he’d been shot, police said. He suffered gunshot wounds to his left arm and took himself to Stroger Hospital, where he was listed in serious condition.