CHICAGO - Chicago Public Schools students will begin the new school year next month at home with full-time remote learning, according to a report.

The Chicago Sun-Times reports the announcement could be made as soon as Wednesday, and that Mayor Lori Lightfoot and CPS officials will "follow the science" regarding how long students will learn from home amid the coronavirus pandemic.

The decision comes after a source on Tuesday told FOX 32 that the Chicago Teachers Union would be convening an emergency meeting of its delegates early next week to discuss a strike vote in an effort to pressure Chicago Public Schools officials to back down from a proposal that would see students partially return to classrooms in the fall.

“They will discuss a rank-and-file led process to take a strike vote to demand remote learning for CPS," the source had said.

The approval of at least three-quarters of the CTU's 26,000 rank-and-file members would have been needed for a strike to be authorized.

On Monday, Chicago teachers and the CTU made it clear they are adamantly against resuming any in-person learning, saying it is not safe due to COVID-19.

“I do not want to be the sacrificial lamb because you're forcing us to go back into an environment that is dangerous,” said educator Andrea Parker.

The CTU had said all learning should be remote this fall, not combined with in-person learning, as CPS had proposed.

“It is not appropriate to in-person learn in an environment with raising contagion where positivity rates are over 8-percent in more than a dozen neighborhoods across the city,” CTU President Jesse Sharkey had said. 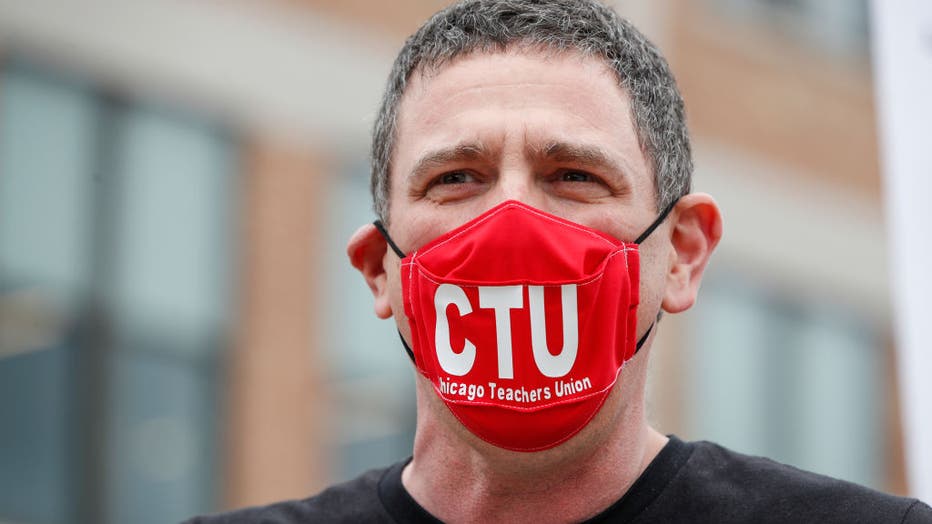 Chicago Teachers Union President Jesse Sharkey speaks prior to the Occupy City Hall Protest and Car Caravan hosted by CTU in Chicago, Illinois, on August 3, 2020. - Teachers and activists hold car caravan all over the country on August 3, 2020 to dem

In a statement Monday, CPS said: "Nothing is more important than the health and safety of our students and staff, and Chicago Public Schools won't open its doors on September 8 if public health officials don't deem it safe to do so."

Chicago teachers walked off the job for 11 days in October, winning a 16% raise during a five-year contract and funding to add social workers and nurses to the city’s schools.

The decision would come as school districts around the country are deciding how to teach children during the pandemic.

The Los Angeles Unified School District has decided against reopening later this month for in-person learning. School officials say it would not be safe for students to do so while the coronavirus continues to spread.

The New York City Department of Education has yet to come up with a plan to reopen its schools. Jim Malatras, an aide to Gov. Andrew Cuomo, said Sunday the district has come up an outline to reopen the city’s schools, but not a plan.