Chicago teachers adamantly against in-person learning: ‘I do not want to be the sacrificial lamb’

CHICAGO - “This is a life or death situation for these children to go back into these buildings,” said Crystal Williams Hayes of the Chicago Teachers Union.

Stark terms from Chicago teachers, saying lives are on the line if students return to school in person. Chicago Public School families are supposed to decide by Friday if they will send their kids to class next month. But teachers say it is not safe.

On Monday, Chicago teachers honked their horns to try to sound the alarm about the return to school.

“I do not want to be the sacrificial lamb because you're forcing us to go back into an environment that is dangerous,” said Andrea Parker.

The Chicago Teachers Union says all learning should be remote this fall, not combined with in-person learning, as CPS has proposed.

They took their message with a car caravan straight downtown to Mayor Lori Lightfoot.

“It is not appropriate to in-person learn in an environment with raising contagion where positivity rates are over 8-percent in more than a dozen neighborhoods across the city,” said CTU President Jesse Sharkey. 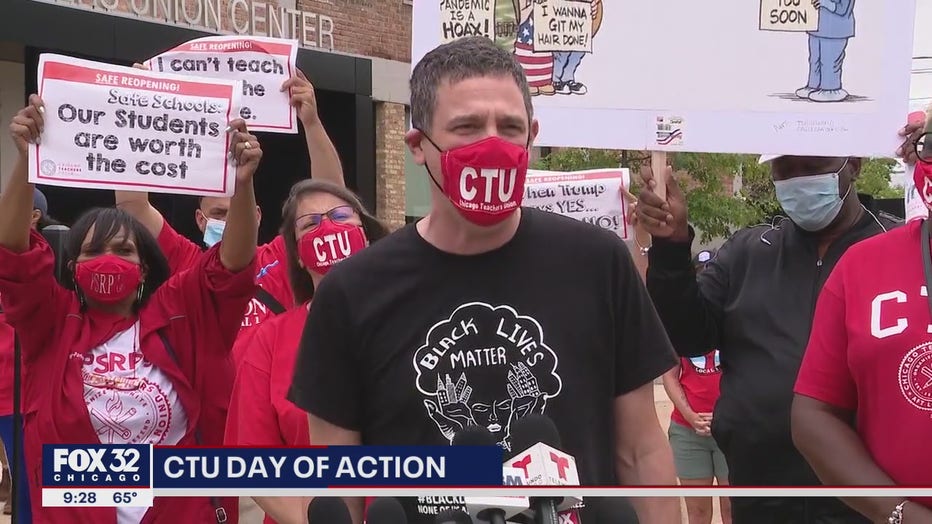 Near City Hall, the educators displayed signs showing their many worries about teaching during a pandemic.

CTU leaders say this fight is the latest sign of indifference for black and brown communities.

“We have a mayor trying to convince us that three masks will be enough to keep an entire school community safe. Come on y'all. At what point is Chicago going to lift up the lives of people who live here,” said CTU Vice President Stacy Davis-Gates.

In a statement, CPS says: "Nothing is more important than the health and safety of our students and staff, and Chicago Public Schools won't open its doors on September 8 if public health officials don't deem it safe to do so."

That first day of school is just five weeks away and the plan for it is still in the works.