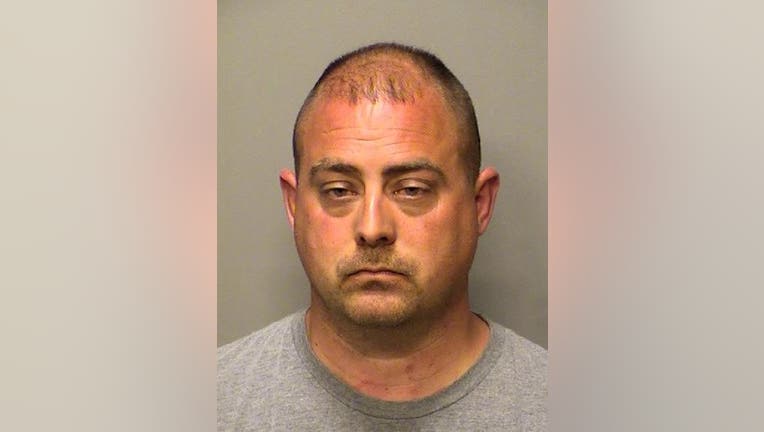 PORTAGE, Ind. - A south suburban Crestwood police officer has been charged with choking his wife until she lost consciousness in front of their children at a northwest Indiana campground.

Dino Anthony Pavoni, 38, is charged with one felony count of strangulation, three felony counts of domestic battery and one misdemeanor count of interference with the reporting of a crime, according to an arrest report from police in Portage, Indiana.

Pavoni lives in Midlothian and works as an officer with the Crestwood Police Department, according to the report.

Officers were called for reports of a disturbance at 3:08 a.m. May 17 at the Lakeshore Camp Resort, 5300 Old Porter Road, according to police records. Investigators learned Pavoni got upset and began yelling at his wife, 39, after she woke him up to ask for help closing the awning of the trailer they were staying in.

During an ensuing struggle, Pavoni allegedly hit one of his children with a door before hitting his wife, knocking her to the ground inside the trailer and choking her until she lost consciousness, according to police. The three children witnessed the attack and one of them recorded videos of it while another called police, the report says.

During an interview with a Portage officer, Pavoni denied hitting his wife and claimed she attacked him before having a seizure and falling to the ground, according to the report.

Pavoni was taken into custody and booked into the Porter County Jail, according to police. His wife was evaluated by paramedics at the scene.

Multiple weapons in the trailer and in Pavoni’s vehicle were seized by Portage police. The guns are believed to be the property of the Crestwood Police Department.

Crestwood police could not be reached for comment Saturday morning.

Pavoni appeared in court May 20 and his next hearing is scheduled for July 6, according to Porter Superior Court records.