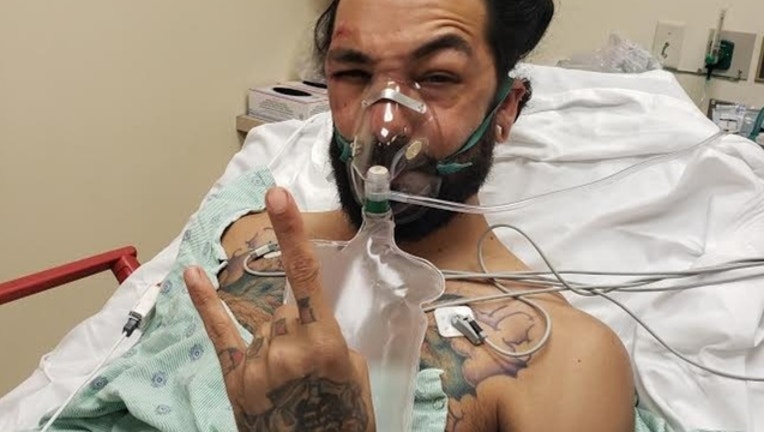 CHICAGO (SUN TIMES MEDIA WIRE) - A bicyclist was hospitalized Thursday after he was hit by someone riding one of the 2,500 electric scooters that have taken over city streets since June 15.

Allyson Medeiros, a tattoo artist at Evoke Tattoos and Skin Abrasions, was biking home from work when he was struck by an electric scooter rider traveling on the wrong side of the road in Wicker Park, according to a GoFundMe page set up by his co-workers to pay for his medical bills.

Officer Anthony Spicuzza, a Chicago police spokesman, confirmed that a 32-year-old man was riding his bike about 5:30 p.m. that evening in the 1200 block of North Leavitt Street when a male on a scooter crashed into him head-on.

Spicuzza said the man was taken to Stroger Hospital. The GoFundMe page for Medeiros said he spent the night in a trauma unit, where he received 20 stitches and was treated for "a dangerous amount of air in his chest cavity," a broken nose, a broken jaw and other injuries.

A photo of a bloodied curb is featured on the page for the crowdfunding campaign, which had raised almost $8,000 of its $10,000 goal Tuesday night.

"The past few days have being interesting watching my body healing from all of this," Medeiros said in an Instagram post Monday. "I am extremely happy and grateful for what happened compared to what could have happened and even more grateful to everyone that is being so helpful and loving with me right now."