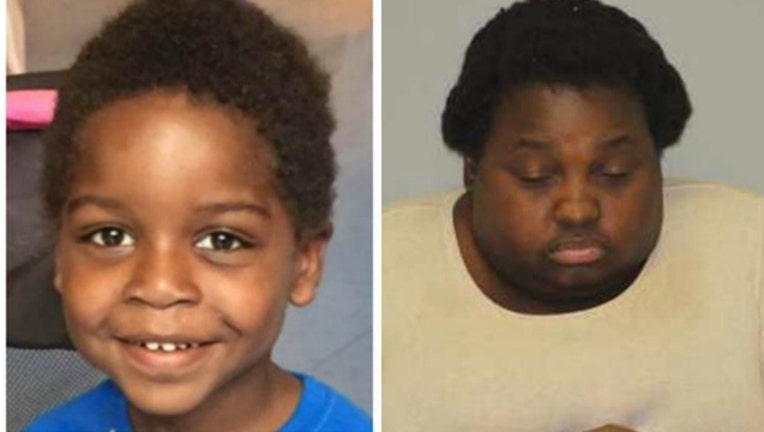 JEFFERSON CITY, Mo. (AP) - A man whose ex-girlfriend is charged in the killing of his 4-year-old son in Missouri says he believed she would take care of his child while he visited his ailing mother in Chicago.

Kijuanis Gray reportedly said he "trusted" Quatavia Givens, 26, to look after his son, Darnell Gray, at his home in Jefferson City, and that he "wasn't expecting her to do this."

Givens was charged Wednesday with neglect or abuse of a child resulting in death. No attorney who can speak on her behalf is listed in online court records.

After Givens reported Darnell missing on Oct. 25, authorities went door-to-door, drained a retention pond and used a helicopter in the search for the boy. Givens didn't tell authorities where his body was until after it was found Tuesday in a wooded area in Jefferson City, according to charging documents. An autopsy determined he had suffered blunt and sharp force trauma.

"That's my only child that I had, my only child," said Gray, who described his son as smiley and "goofy." ''He loved to run around with me. He loved to play basketball."

Gray reportedly said he moved from Chicago to Missouri a few years ago because he "wanted a better life," and brought his son to Missouri six months ago. Gray said he's no longer with Darnell's mother, who still lives in Chicago.

Police Lt. David Williams declined to identify Darnell's parents or specify the relationship between Givens and Darnell's father, saying the department doesn't identify parents of juvenile victim. But he did say Givens and the father had separate addresses about one block apart at the time Darnell's disappearance. Williams said the father wasn't in Jefferson City when he was contacted about his son's disappearance.

Charging documents said Givens initially told officers that Darnell either was abducted or ran away during the night. She later told police that she hurt the child, saying "I may have hit him wrong," the statement said. It also said Givens, who is jailed without bond, had told investigators she planned to travel to Florida "to get out of the area."

Williams said the investigation is ongoing and that he couldn't rule out additional charges against Givens or another suspect. "By no means do we think we are done," he said.

Court records show that a man identified as a having had a "romantic/intimate social relationship" with Givens filed an order of protection against her in May 2016. No details were offered about why the order was sought. The man doesn't have a listed phone number.

At the time of her arrest, Givens was on probation for stealing leased or rented property. Court documents said she owed money to Rent-A-Center for a four-piece bedroom set and mattress, which she hadn't returned. Also, a court ruling issued last week ordered that Givens' wages from First Group America Inc., which runs the school bus operator, First Student, to be garnished over the failure to make payments on a vehicle.

Jay Brock, a spokesman for First Group America, said Givens applied with the company in July but never completed training and was not offered a job. He said applicants who are undergoing training never interact with students.