Deputy Andrew Long's quick reaction helped save a man who tried to jump off a bridge in Tuolumne County.

ANGELS CAMP, Calif. - A sheriff's deputy grabbed a man as he stepped off a bridge in Tuolumne County and held him through a railing until others helped pull him to safety.

It happened Monday around 10 a.m. roughly 150 feet above the Stanislaus River on the Parrotts Ferry Bridge near Angels Camp, according to the Tuolumne County Sheriff's Office.

Authorities received a tip around midnight that a male was threatening to jump off a bridge in the area. Crews searched for three hours and discovered the man’s car near the bridge but they did not find him.

Rescue teams, including mutual aid provided by the Calaveras County Sheriff’s Office and Angels Camp Police Department, began another search of the area around 7 a.m.

Roughly three hours later, the man was located on the Parrotts Ferry Bridge and Corporal Andrew Long talked with him for about 10 minutes. Long informed the man that there are programs available to help and that people care about him, according to Sgt. Greg Stark with the Calaveras County Sheriff's Office.

"Corporal Long began a dialogue with him, trying to get him out of crisis using de-escalation techniques," he said. "Unfortunately, his best efforts did not work and the subject subsequently attempted to jump over the railing of the bridge."

But as the man started climbing over the edge, Long was able to run about fifty feet, dive, and grab the man's arm as he fell, holding him through the railing as he dangled for about 30 seconds, officials said. A dramatic photo shows the man hanging as the deputy grips his left arm. 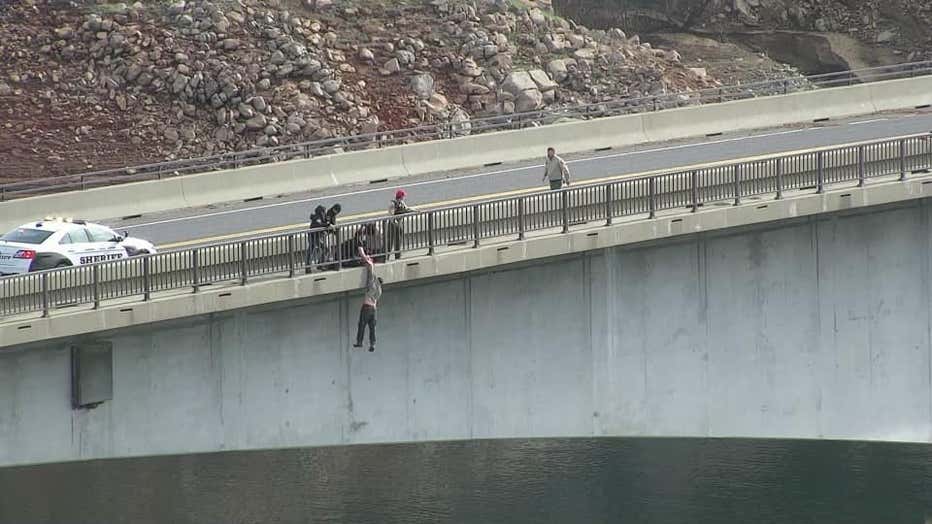 A sheriff's deputy grabbed a man as he jumped of a bridge in Tuolumne County and held him until others helped pull him to safety. Photo: Photo Credit: Calaveras County Sheriff’s Office UAV Team

"Every day deputies are asked to make split-second decisions on life and death," Stark said. "Corporal Long obviously acted with the amazing courage to jump towards the edge of a bridge while someone's weight is carrying them over."

Additional members of the rescue crew, including a person identified only as Deputy Markovitz, helped pull the man to safety. He was transported to an area hospital with no injuries.

If you or anyone you know is experiencing thoughts of suicide or emotional distress, help is available. The National Suicide Prevention Hotline is open 24 hours a day, seven days a week. Call 1-800-273-8255.