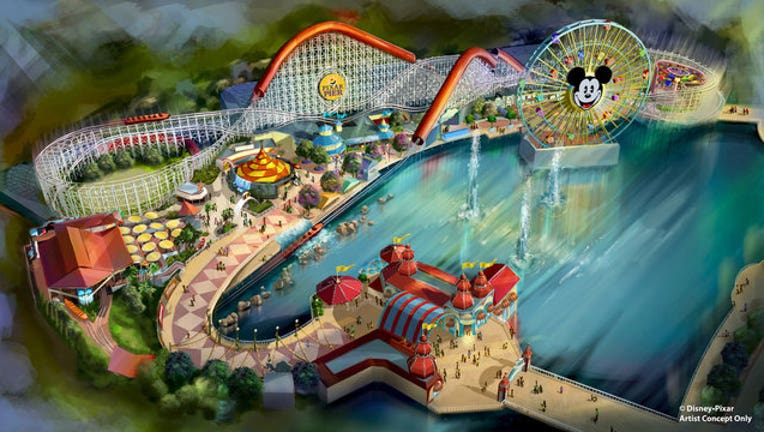 ANAHEIM, CA (FOX 11) - The popular California Screamin’ roller coaster will be closing and transformed into a new attraction as Disney California Adventure Park remakes a portion of the Paradise Pier area into Pixar Pier with a new 'Incredicoaster', the theme park announced Thursday.

The wonderful worlds of Pixar will get a new home at Disney California Adventure Park when Pixar Pier opens in summer 2018, transforming the area that is now Paradise Pier with the thrilling, new Incredicoaster, four new imaginative neighborhoods, plus entertainment, themed food and beverage, and merchandise. Guests will experience Pixar stories and characters in incredible new ways on this seaside waterfront at the Disneyland Resort, according to a Disney news release.

The first neighborhood is inspired by Disney·Pixar’s “The Incredibles” and it will open in summer 2018 with the Incredicoaster. Permanently transformed from the attraction that is now California Screamin’, Incredicoaster will invite guests into a mid-century-modern-style loading area where they board vehicles with a distinctive, new look. New character moments, new scenes and special effects, and an exciting musical score will connect the attraction’s story to Pixar’s “The Incredibles 2,” which opens in theaters June 14, 2018.

A fourth new neighborhood will celebrate a collection of guest-favorite Pixar stories. Mickey’s Fun Wheel will be themed with a new look and each of the 24 gondolas will showcase a different Pixar character. The iconic face of Mickey Mouse will continue to beam happiness across the Paradise Bay side of the wheel. At the Games of the Boardwalk, which currently includes a game called Bullseye Stallion Stampede, guests will find that all the midway games will be inspired by Pixar characters. New games are expected to include characters from “A Bug’s Life,” “La Luna” and “WALL·E.”

You can read more at the Disney Parks Blog