CHICAGO - Distilleries are brewing up something new and you can't drink it.

"We normally use this still for gin production. And today we're basically using it to make hand sanitizer,” said Drew Fox.

For the next 72 hours, 18th Street Distillery in Hammond will be turning corn mash into hundreds of gallons of 90-proof alcohol.

All of it will be given away for free.

"Basically we're going to take care of all the medical professions first, first responders, then the elderly, then families with kids who are in desperate need of hand sanitizer,” Fox said.

During World War II, thousands of American factories were converted to fight the war. Now, Chicago area distilleries say they're ready to help fight a new enemy – and that’s COVID-19.

"I think anybody who finds themselves in a war, and we're in a world war right now, if they can, they step up,” said Sonat Birnecker Hart.

Hart is founder and president of Koval Distillery on Chicago's North Side, which just received federal approval to begin making alcohol for hand sanitizer. 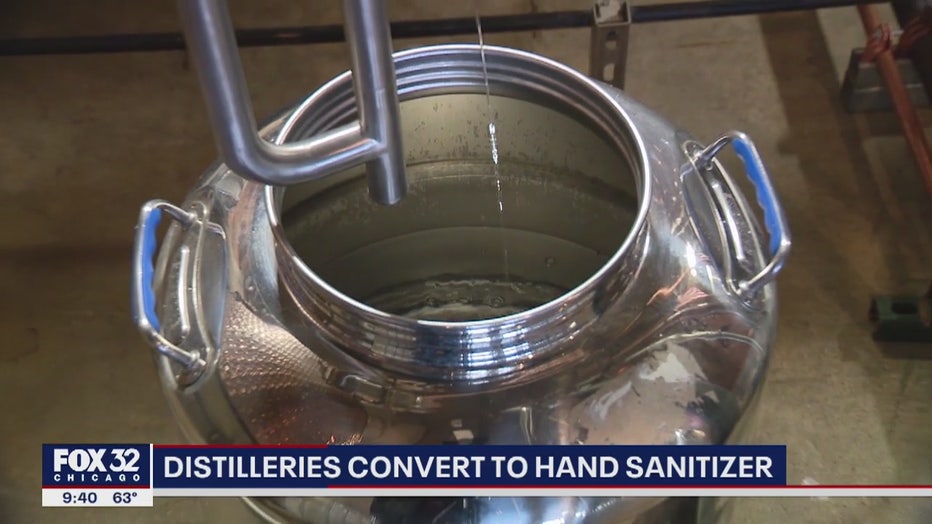 They plan to give away thousands of gallons worth and have established a GoFundMe page to help pay for the basic ingredients and packaging.

"We want to be able to provide this to people on the front lines. We've completely shifted all production to be making this. Putting it in whatever vessels we can so we can get it out the door,” Hart said.

Both distilleries are making the hand sanitizer based on the recipe from the World Health Organization, and both say even though they're losing money on whiskey and gin. But it doesn't matter when they know they're likely saving lives.

At this point, the sanitizer will not be sold to the public. The distilleries are planning to give them to first responders, hospitals and nursing homes.