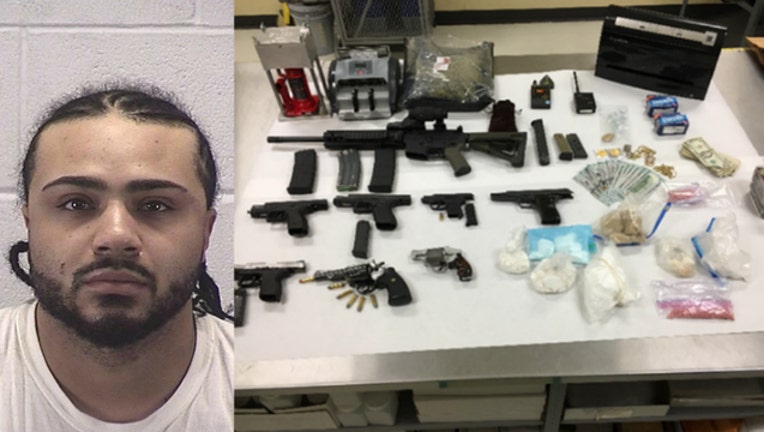 Terrell Alvarez, 23, faces charges of drug possession with intent to deliver and unlawful use of a weapon, according to Aurora police. In all, Alvarez faces 13 felony charges stemming from a search about 7:15 a.m. at his home in the 1300 block of Solfisburg Avenue.

Local officers and officials with the Illinois Department of Corrections showed up at Alvarez’s home to ensure he was complying with the conditions of his parole and discovered guns and drugs sitting out in plain sight, authorities said.

Alvarez was paroled in July after serving time in prison on charges of manufacturing and delivering cocaine and mob action, according to department of corrections records.

Among the items seized were an AR-15 rifle, multiple handguns, 784 grams of cocaine and 234 grams of heroin, police said. Marijuana, ecstasy and Xanax pills were also recovered.

Police also reported seizing $6,000 in cash and eight pieces of jewelry, including a gold “Jesus face” medallion and a gold necklace with a “diamond Jesus face.”

A bag of 36 loose diamonds was also taken by authorities.

In addition to the new charges, Alvarez now faces a parole violation from the department of corrections.