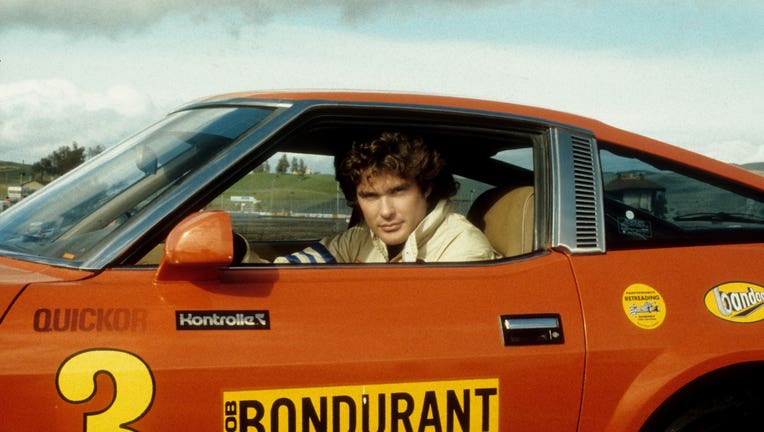 SEARS POINT - CIRCA 1981: Actor and singer David Hasselhoff poses in his race car at the Bob Bondurant school of high speed driving circa 1981 in Sears Point, California. (Photo by Michael Ochs Archives/Getty Images)

PARADISE VALLEY, Ariz. - Bob Bondurant, a former champion race car driver who opened a high-performance driving school in 1968 and taught numerous A-list actors for their movie roles, has died. He was 88.

According to his family and the Bondurant Racing School website, Bondurant died Friday in the Phoenix suburb of Paradise Valley. No cause of death was released.

Bondurant taught stunt driving, competition driving, police pursuit driving, evasive driving for chauffeurs and bodyguards, plus other skills, according to the website. His school has had over 500,000 graduates, it said.

Born in Evanston, Illinois, Bondurant and his family moved to California when he was 2.

He raced motorcycles on dirt tracks as a teenager before switching to cars in 1958 and racing for the Shelby American, Ferrari and Eagle teams.

Badly injured in a 1967 crash at the racetrack in Watkins Glen, New York, Bondurant drafted an idea for a high-performance driving school while recuperating.

He opened the school in early 1968 at California's Orange County International Raceway, then moved it to Ontario, California, and later Sonoma, north of San Francisco.

He was inducted into the Motorsports Hall of Fame of America in 2003.

Bondurant is survived by his wife, Pat, who is president and CEO of the Bondurant Racing School. She vows to continue the legacy of the school.

:Bob Bondurant has had a worldwide impact on the motorsports industry, and his legacy will live on eternally as the Bondurant Racing School moves forward into the future," Phoenix Raceway President Julie Giese said in a statement.