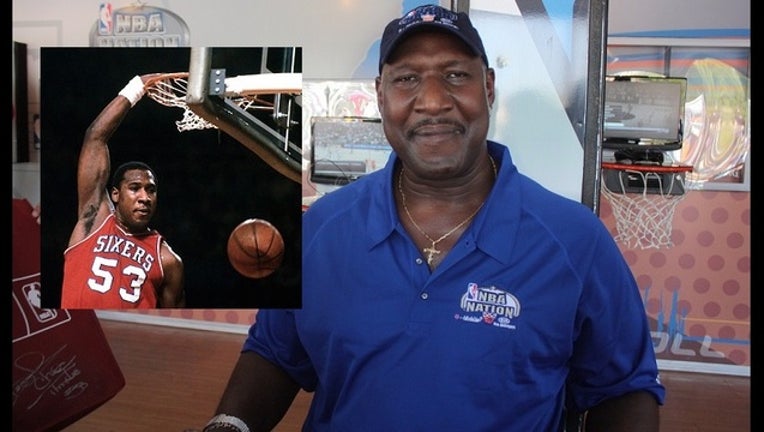 (AP) - Darryl Dawkins was once summoned in the Philadelphia 76ers' locker room to come meet a celebrity who wanted to meet the man known for dunking with backboard-breaking force.

The guest was Grammy Award winner Stevie Wonder. The entertainer is blind, yet even he could tell there was something very unique about Dawkins' game.

"A guy who never saw me," a beaming Dawkins said in a 2011 televised interview, "gave me the name 'Chocolate Thunder.'"

The name stuck, and the rim-wrecking, glass-shattering dunks remain unforgettable - as will the giant of a man who changed the game with them. Dawkins died Thursday at a hospital in Allentown, Pennsylvania, according to the Lehigh County coroner's office. He was 58, and even though officials said an autopsy would be performed on Friday his family released a statement saying the cause of death was a heart attack.

"Darryl touched the hearts and spirits of so many with his big smile and personality, ferocious dunks, but more than anything, his huge, loving heart," his family said. "His family, wife Janice, children Dara, Tabitha, Nicholas and Alexis, along with countless family, friends, and fans, all mourn his loss.

"More than anything Darryl accomplished in his basketball career as the inimitable 'Chocolate Thunder,' he was most proud of his role and responsibility as a husband and father," his family added.

Dawkins, the first player to go from high school into the first round of the NBA draft, spent parts of 14 seasons in the NBA with Philadelphia, New Jersey, Utah and Detroit. He averaged 12 points and 6.1 rebounds in 726 career regular-season games.

"The NBA family is heartbroken by the sudden and tragic passing of Darryl Dawkins," Silver said. "We will always remember Darryl for his incredible talent, his infectious enthusiasm and his boundless generosity. He played the game with passion, integrity and joy, never forgetting how great an influence he had on his legions of fans, young and old."

Dawkins was selected No. 5 in the 1975 draft by the 76ers. His two backboard-shattering dunks came about a month apart early in the 1979-80 season, one against Kansas City, the other against San Antonio.

"You were one of my favorite players of all time," Houston center Dwight Howard posted Thursday on Instagram under a photo of Dawkins dunking in a game. "You were very inspirational to a lot of young players. Thank u for the long talks and great memories. I can't believe that you're gone. But you are in a better place. You were the originator of the dunk."

Dawkins' shows of force unquestionably changed the game. The NBA soon went to breakaway rims and mandated that backboards be shatter-resistant.

"Simply put, Darryl Dawkins was beloved-by his family, friends, former teammates and his fans all over the globe," 76ers CEO Scott O'Neil said. "His endearing charm, infectious smile and unparalleled sense of humor will be sorely missed. 'Chocolate Thunder' will always have a special place in our hearts. His family is in our thoughts and prayers."

Dawkins was, by any measure, a character. His love for the game was unquestioned and unwavering - he appeared at an 76ers alumni event earlier this month and recently posted a photo to his Twitter account of him coaching a summer-league girls team.

Dawkins was as revered off the court as he was on it. He remained enormously popular after his playing days were done, even during his stint as a member of the Harlem Globetrotters. He would name his dunks - the "look out below," the "yo-mama" and the "rim wrecker" among them - and often boasted that he hailed from the "Planet Lovetron."

In actuality, he was born and raised in Orlando, Florida, growing up impoverished with dreams of giving his mother and grandmother better lives.

"A great man, entertainer, athlete and ferocious dunker," former NBA guard Kevin Johnson wrote on Twitter. "He will be missed but not forgotten."

He averaged double digits in nine consecutive NBA seasons, with his best year likely being the 1983-84 campaign for New Jersey. He averaged a career-best 16.8 points that year, with only foul trouble - 386 that season, still a league record - holding him back.

"Darryl Dawkins is the father of power dunking," Shaquille O'Neal once said. "I'm just one of his sons."