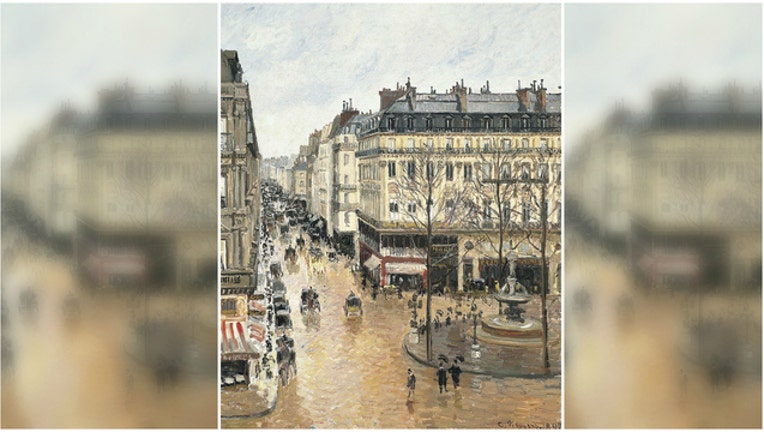 LOS ANGELES (AP) - In the epic, 16-year battle over a priceless painting looted by the Nazis, there is one point on which all sides agree: When Lilly Cassirer and her husband fled Germany ahead of the Holocaust, they surrendered their Camille Pissarro masterpiece in exchange for their lives.

The Jewish couple traded the work for the exit visas that allowed them to flee to the safety of England in 1939. When they did so, they set Pissarro's stunning 1897 oil-on-canvas Paris street scene on an incredible journey of its own.

It was an odyssey that would take "Rue St.-Honore, Apres-Midi, Effet de Pluie" from Germany to the United States, through the hands of several wealthy collectors and prominent art dealers and, finally, to Spain's Thyssen-Bornemisza Museum, where it has resided since 1993.

Since 2000, Lilly Cassirer's heirs have been trying to get it back.

They may get one of their last best chances Monday when their lawyer, David Boies, argues before a federal appeals court that under state law and international treaties, the painting appraised at more than $30 million belongs to Cassirer's great-grandchildren.

"This is an issue that is critically important not only in terms of trying to right terrible wrongs that had their origin in the Nazi persecution of the Jews but also to establish principles that are very important to what's happening now in the world," Boies said earlier this week.

"Month after month, you see reports of ISIS looting art in Muslim countries and selling it to raise money," he continued. Allowing Spain to keep the painting, he said, would tell the world that buying looted art has no consequences.

The museum's attorney, Thaddeus J. Stauber, argues the issue is no longer about looted art but simply well-documented ownership rights to a painting purchased in good faith.

What's more, Stauber says, Cassirer forfeited her ownership rights when she accepted $13,000 from the German government in 1958 for the painting's loss.

There's no dispute about the painting's complete history.  The court examined all the evidence and determined that the museum is the rightful owner of the painting," Stauber said, referencing a federal judge's ruling in Los Angeles last year.

U.S. District Judge John F. Walter determined that under Spanish law the artwork belongs to the museum, but he concluded that when Cassirer accepted payment for the painting in 1958 she had no idea it still existed.

That shows, Boies says, that Cassirer never signed away her rights.

Her great-grandson, David Cassirer, said his family didn't learn of the work's existence until a friend of his late father, Claude, saw it in a museum catalog in 1999.

Sleuthing by both sides revealed that soon after Lilly Cassirer and her husband left Germany, the work -- originally acquired by Lilly's father-in-law from Pissarro's art dealer -- was sold to an anonymous German buyer.

It eventually arrived in the United States and was subsequently bought and sold more than once before Baron Hans-Heinrich Thyssen-Bornemisza, scion of Germany's Thyssen steel empire and one of the 20th century's most prominent art collectors, acquired it from New York gallery owner Stephen Hahn in 1976.

Thyssen-Bornemisza, who died in 2002, gave the painting and the rest of his collection to the Spanish government in 1993, creating the museum that bears his name.

After the museum refused to hand over the work, the Cassirer family sued.

At one point, a judge dismissed the lawsuit, saying California law extending the statute of limitations for art theft to 100 years infringed on the federal government's authority. But the 9th U.S. Circuit Court of Appeals ordered the case reheard, leading to Walter's ruling last year in favor of the museum.  The appeals court now takes up the issue again at Monday's hearing before a three-judge panel in Pasadena.

Boies argues the judge misinterpreted Spanish law in issuing last year's ruling and that, in any case, Spain is a signatory to international treaties that seek to return looted art to its rightful owners.

He pointed out that just last Monday, France returned a 16th century portrait attributed to Joos van Cleve or his son to the descendants of another German-Jewish couple forced to sell when they fled Germany. He said Spain should follow France's lead.

"The message that the Spanish museum's argument sends to the people who would loot art today is a terrible message and one that is really shameful," he said.