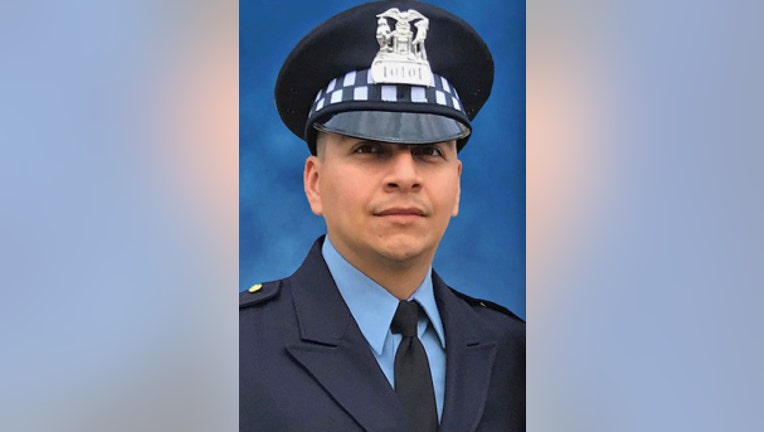 CHICAGO - The family of a Chicago police officer hit and killed by a train last year while pursuing a man with a gun filed a wrongful death lawsuit claiming negligence on part of several parties involved.

The family of officer Eduardo Marmolejo accuses negligence and willful and wanton conduct by Metra, South Shore Line, the train conductors, the suspect they were chasing and the City of Chicago, according to a 54-count suit filed Tuesday in Cook County Circuit Court

About 6 p.m. Dec. 17, Eduardo Marmolejo and Conrad Gary responded to reports of shots fired at 101st Street and Dauphin Avenue, police said. When they arrived, they confronted the suspect, Edward R. Brown, who ran up to the train tracks at 103rd Street and Cottage Grove Avenue.

During the pursuit, Marmolejo and Gary were struck and killed by a South Shore Line train, according to authorities. They were pronounced dead at the scene.

Brown, the alleged gunman they were looking for, was arrested while he was coming down the stairs near the tracks at 103rd and Cottage Grove, police said.

Brown, the alleged gunman they were looking for, was arrested while he was coming down the stairs near the tracks at 103rd and Cottage Grove, police said.

Police later said it appeared that the sound of another passing train may have drowned out the sound of the train which ultimately hit them from the rear.

The lawsuit claims that the city of Chicago and the railroad companies who erected the fence next to the railroad tracks should have known that it didn’t completely surround the tracks, allowing individuals to enter the property.

It also alleges the city and the companies allowed the fence to become dilapidated by failing to make necessary repairs, and failed to provide proper lighting on the railroad tracks.

A spokesman for the city Law Department said the city cannot comment on pending or proposed litigation.

Additionally, the suit alleges that the train conductors dimmed the headlights of the approaching trains, failed to keep a proper lookout and did not engage horns and whistles to warn Marmolejo of an oncoming train.

The suit also claims Brown was negligent and displayed willful and wanton conduct by discharging a handgun and running onto railroad tracks “with a conscious indifference and or conscious disregard for public safety.”

A Metra spokesperson said they couldn’t comment on pending litigation. Messages sent to South Shore Line, another defendant, were not immediately returned. Attorney Frank P. Kostouros, who is representing Brown in the criminal case, said he could not comment on the new lawsuit.