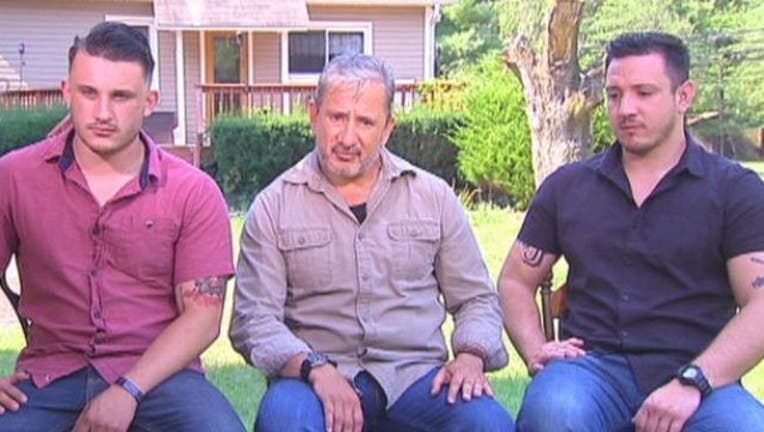 Harry M. was a U.S. Marine, a civilian police officer and a staff sergeant with the U.S. Army National Guard. He served numerous combat tours, including a violent stretch in Ramadi as a sniper team leader in 2005, tasked with capturing or killing high-value targets. He had retired from the service to his home in New Jersey, when two of his sons, Josh and James, told him they were planning a trip to Kurdistan to join the fight against ISIS terrorists. The 49-year-old divorced dad knew he had to go with them.

“'We want to join with Peshmerga and we want to confront ISIS on our terms,’” Harry said his sons told him. “I've got over 20 years experience and I thought to myself, ‘I got two boys going, there is no way they are going without me.’”

Josh, 29, is Harry’s oldest son. Tall, handsome and built like a linebacker, he was a U.S. Marine machine gunner, serving two tours in Afghanistan, one of them during the surge in Al Anbar province. On his left arm is a tattoo of a skull and crossbones – but the crossbones are .50 caliber machine guns.

“I don’t even watch the news anymore because I can’t imagine what those people are going through” Josh said about the Iraqis who must deal with ISIS on a daily basis. “At one point you had the entire U.S. military protecting them, and then they were gone. And then another group of guys, ISIS, came in and just started slaughtering them by the thousands. And there is nowhere to run. I couldn't imagine that. And I sit at home. The war drew down. The war technically ended for conventional warfare which put me and my brother basically out of a job.  I'm still able to fight and the opportunity arose… James lit the fire… and I'm going. That’s it. I need to help out."