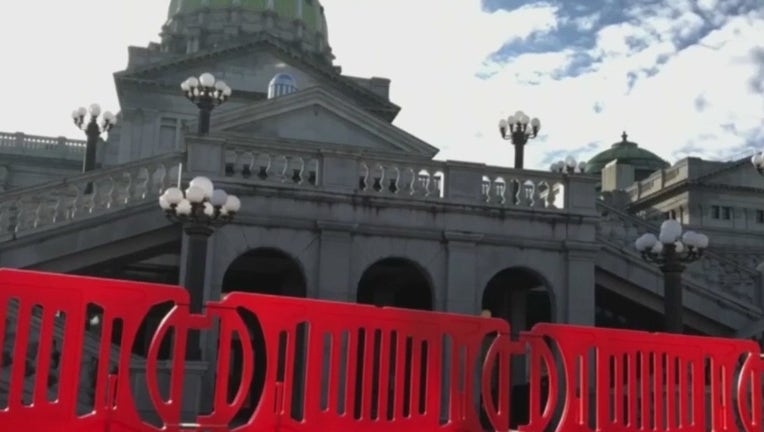 A self-described "hardcore leftist" was arrested Friday for allegedly issuing a call to arms online to recruit like-minded individuals to join him in violently confronting pro-Trump supporters expected to gather at the Florida state Capitol in Tallahassee on Sunday, just days before the presidential inauguration.

Daniel Alan Baker – an alleged Antifa supporter who participated in several anti-police protests last year around the country, including in Seattle’s CHOP/CHAZ zone – was arrested "without incident" by FBI agents early Friday with assistance from the Florida Department of Law Enforcement and the Tallahassee Police Department.

Baker, who prosecutors say was kicked out of the Army and was homeless for several years in the Tallahassee-area before choosing to fight alongside a U.S.-designated terrorist group in Syria, is now charged with violating a federal law that makes it a felony to "transmit in interstate or foreign commerce any communication containing any threat to kidnap any person or any threat to injure the person of another."

He appeared before Magistrate Judge Charles A. Stampelos on Friday and is scheduled to remain at a federal detention center in Tallahassee until his next court appearance scheduled on Jan. 21, the Tallahassee Democrat reported.

Florida Gov. Ron DeSantis on Saturday granted Tallahassee Mayor John Dailey’s request to have the National Guard brought in to help protect the state Capitol. This comes as an FBI internal memo warned of potential armed protests at state Capitol buildings in all 50 states in the days leading up to the inauguration. The Tallahassee City Hall and the Leon County Courthouse will be closed early this week.

In social media posts that have escalated over the past few months, Baker, 33, has attempted to recruit and train others to further his anti-government or anti-authority violent extremism ideology, has made multiple violent threats to those he claims are White supremacists, fascists, and U.S. citizens and allies with different ideologies than his, and has promoted the killing of U.S. military officers, according to a criminal complaint filed in the U.S. District Court for the Northern District of Florida.

More recently, he has posted that people should prepare for another civil war. Beneath a local news station article reporting on Tallahassee police preparations for Inauguration Day, Baker shared a flyer on Jan. 14 titled, "Call to Arms January 20!!" that instructed others to join him in encircling any protesters and confining them at the state Capitol complex in Tallahassee using firearms.

"This is an armed COUP and can only be stopped by an armed community!" the flyer posted by Baker stated, according to the criminal complaint. "If you're afraid to die fighting the enemy, stay in bed and live."

Baker can be seen in photos and YouTube videos with "anarchist-type monologues" playing in the background and beside Antifa flags and a variety of firearms, including those with high-capacity magazines. Within the last 24-48 hours before his arrest Friday, social media posts showed that Baker was actively attempting to purchase additional firearms, including an AK-47 and a pistol, prosecutors said.

"Extremists intent on violence from either end of the political and social spectrums must be stopped, and they will be stopped," U.S. Attorney Lawrence Keefe said in a statement. "The diligent work in this case by the FBI and other public safety organizations has averted a crisis with this arrest, and we will not stop in our efforts to detect, deter, and disrupt anyone else planning to incite or commit violence."

"While extremists who plan mayhem may skulk in the shadows, it’s important that we force them into the light and bring them to justice," Keefe added. "This arrest serves as a message to anyone who intends to incite or commit violence in the Northern District of Florida: If you represent a threat to public safety, we will come for you, we will find you, and we will prosecute you."

Baker was temporarily banned from Facebook after the riot at the U.S. Capitol. On Jan. 12, Baker posted the ban had been lifted, adding: "Death to amerikka of course, f--k the president, current and elect."

He allegedly had made several posts on social media offering monetary rewards to anyone who would help him identify and hunt down those seen in videos of mostly pro-Trump rioters who stormed the U.S. Capitol building in Washington, D.C., on Jan. 6. He also offered rewards for anyone who helped identify U.S. Capitol police officers who he claimed were seen allowing demonstrators past barricades.

"There will be no faith in law enforcement until every single department is shut down and replaced by new faces," Baker commented on a YouTube video posted on Jan. 8. "Yall better hope the cops find you before we do cuz l believe in torturing prisoners for information. Yall better turn yourselves in cuz we dont intend to involve the cops."

After approximately one year in the U.S. Army, Baker received an "other-than-honorable" discharge in 2007 after he went AWOL before his unit was to deploy to Iraq, according to the criminal complaint. He was homeless for nearly a decade living mostly in the Tallahassee area, and, in 2017, Baker joined the People’s Protection Units (YPG), a group fighting in Syria against ISIS and the Turkish government.

RELATED: 'It breaks my heart': States and US Capitol prepare for potentially violent week

He claimed on social media that he was a trained sniper for the YPG, and he can be seen in a documentary film fighting ISIS and Turkish militants, prosecutors said. YPG is a sub-affiliate of the Kurdistan Workers' Party (PKK), which is designated by the United States government as a Foreign Terrorist Organization.

Baker was featured in an article published in October 2020 about the downfall of the CHOP, in which he identified himself as a "hardcore leftist," the criminal complaint said.  He traveled around the country to protest against "police brutality and the destruction of America," participating in street demonstrations in Seattle and Nashville.