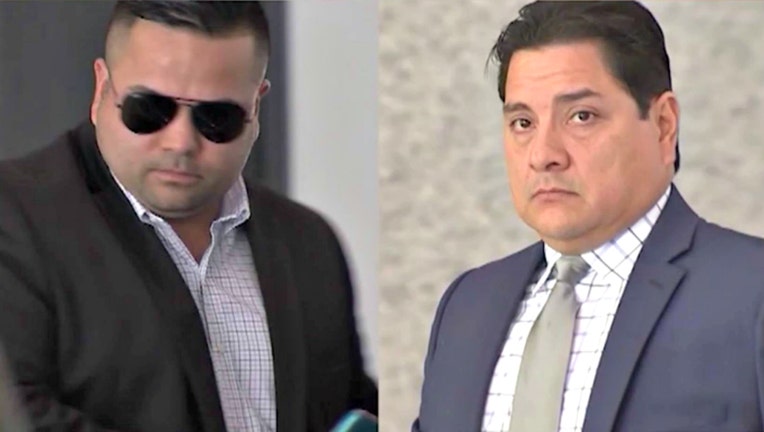 CHICAGO - Federal prosecutors are seeking 10 years each in prison for a veteran Chicago police sergeant and an officer in his gang crime squad who were convicted last year of using bogus search warrants to raid homes and steal cash and drugs.

Prosecutors said in a court filing that the conduct of Sgt. Xavier Elizondo and Officer David Salgado was such a fundamental breach of the public’s trust the longtime cops deserve far more time behind bars than what sentencing guidelines typically call for, the Chicago Tribune reported.

“The institutional havoc wrought by defendants’ conduct is real,” Assistant U.S. Attorneys Sean Franzblau and Ankur Srivastava wrote in Friday’s 17-page filing. “The defendants not only harmed individual victims, but they also impaired the public’s confidence in law enforcement.”

Prosecutors said in their filing that the damage caused by the officers’ alleged actions continues to unfold, with the Cook County state’s attorney’s office having dismissed 37 criminal cases to date that were tainted by Elizondo’s and Saglado’s involvement. In addition, at least 10 civil rights lawsuits are pending against the officers and the city in federal court.

Both men are scheduled to be sentenced March 11 by U.S. District Judge Matthew Kennelly. The guideline calculations in the case call for up to seven years in prison for Elizondo and 6½ years for Salgado.

Elizondo has been with the department for 23 years, and Salgado joined the force in 2003. Both were placed on paid desk duty in January 2018 after they were targeted in a pair of FBI sting operations designed to catch them in the act.

Both officers remained on paid desk duty Monday, according to a Chicago Police Department spokesman.

Elizondo and Salgado carried out their scheme between at least June 2017 and January 2018 while working on the department’s gang crime squad, prosecutors said. They worked with two people who, posing as confidential informants, provided false information to persuade judges to sign the officers’ search warrants.

During those searches, they stole drugs, cash and other items from properties and later shared some of what they stole with the people posing as informants. Prosecutors used undercover audio and video recordings in their investigation.