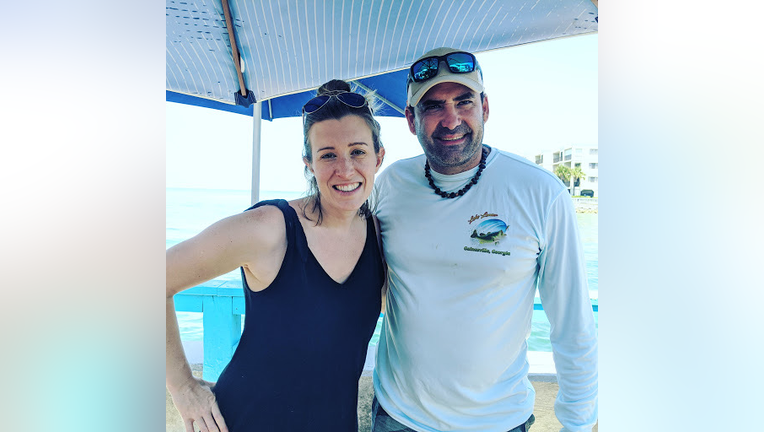 By June, the couple and their two children, ages 6 and 10, needed a break from sheltering in place.

So they took a family vacation to Florida.

They were careful to avoid close contact with strangers, wearing masks when they would go out in public, Christy Rosell says.

Still, Rosell says, most of the tourists they encountered were not wearing masks.

Know how the COVID-19 outbreak is impacting Georgia

A Georgia family who developed pandemic fatigue, went on a vacation to Florida, where they said they felt like they were the only ones wearing masks.

The couple, who both work in the healthcare field, do not know where they contracted the virus, and they may never know.

"It's possible we got it while we were shopping, while we were with crowds of people, and we were being responsible, but they weren't," Rosell says.

Ed developed a fever a few days after they returned home, and then Christy began to feel ill.

Both tested positive for the virus, and the Rosells began calling their friends and neighbors to alert them to quarantine themselves and get tested for the virus.

The coronavirus shouldn't have been a big deal.

Ed is 47, healthy, and works frequently.

But, for him, this virus was a very big deal.

"I just don't want anyone to go through this," Ed Rosell says. "This is horrible."

When Christy recounts the days that followed, her voice is choked with emotion.

"It was the scariest thing that I've ever been through in my life," she says. "I thought I was going to lose my husband."

Tips for flying during pandemic

If you plan on flying during the pandemic, here are some helpful tips to know and follow.

By July 5, Ed was having trouble breathing, and he could not seem to get enough oxygen.

So Christy drove him to Northside Cherokee Hospital, where Ed works as a manager in the IT Department.

He was able to walk on his own into the ER.

"When he got to the door, he collapsed, and they caught him in a wheelchair," Christy says.

She wouldn't see Ed again in person for 11 days.

"They quickly realized that I did have pneumonia already, and my lungs were damaged," Ed Rosell remembers. "I wasn't really getting a whole lot of oxygen."

Because the virus is highly contagious, COVID-19 patients are not permitted to have visitors in the hospital, even those who are critically ill.

So, Ed Rosell, who was immediately transferred into the ICU, had to face this ordeal alone.

"It is really, really hard," he says. "For 11 days, you look at the clock, and you count down, and you hope and pray that you're going to get better."

He was slipping into a panic attack, trying pull off his oxygen mask, and rip off the monitors and IV lines attached to his body.

"I got that phone call about 4:30 in the morning, and they asked me if they could intubate him," Christy remembers. "I was, like, 'Have you done everything? Is there anything else that you can do?' It was upsetting because that is the point I realized he might not come home."

Christy called her parents and other family members.  Then she posted on Facebook, asking people to pray for Ed.

"That God would calm Ed down, so that he could accept the oxygen," Christy remembers asking people. "And that's what ended up happening. They never had to intubate him. He was able to relax."

A nurse helped talk Ed through his panic, and medication was ordered to ease his anxiety. He was able to get the oxygen he needed through a bipap mask.

"That was the worst day of my life, but also the most supported day of my life," Christy Rosell says.  "We had hundreds of people alongside us, praying for us."

A few days later, Ed began to respond to a combination of the drug remdesivir, steroids, and anti-inflammatory medications, Christy says.

The Rosells were about to see each other for the first time in days on the app FaceTime.

Nearly a month after he was hospitalized, Ed Rosell is OK.

He has some residual lung damage he is hoping will heal with time, and he just had his first day back at work.

The Rosells say their brush with the novel coronavirus shook them.

Listening to his wife, Ed agrees.