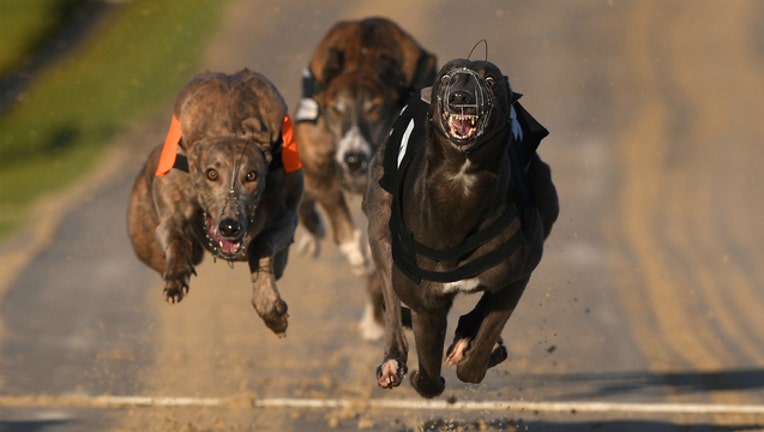 GETTY Greyhound Races at BrightonBRIGHTON, ENGLAND - JANUARY 10: during the race at the Coral Brighton and Hove Greyhound Stadium on January 10, 2018 in Brighton, England. (Photo by Mike Hewitt/Getty Images)

A couple of hundred bettors watch from air-conditioned stands built for thousands. Lean speed machines with names like Bull Gator and Open Throttle chase a mechanical lure for a third of a mile (450 meters), their long strides propelling them past 40 mph (65 kph). The greyhounds cross the finish line with tails wagging -- except for the occasional injured dog carried off by workers.

The scene soon may be history. The sport's demise has long been predicted, with 50 U.S. tracks closing since the 1990s. On Nov. 6 Florida voters will decide on a measure banning greyhound racing by 2021 that may kill it nationally.

Amendment 13's supporters, including animal rights groups, say dogs at Florida's 11 tracks frequently are locked in crates up to 23 hours a day, some suffering abuse -- allegations trainers vehemently deny -- and risk gruesome injuries on the track.

"This industry is on its way out, but meanwhile dogs are suffering," said Kate MacFall, Florida director for the Humane Society of the United States.

But racing supporters say greyhounds are treated better than most pets and are happiest when competing. They say injured dogs get quality veterinary treatment and racing opponents exaggerate the frequency of injuries to garner donations. Most injured or slow dogs are adopted, not destroyed, they say, and the industry supports 3,000 jobs.

"If reincarnation exists, people should want to come back as a racing dog," said Palm Beach trainer Arthur Agganis, who has been running greyhounds for 43 years and has five employees. He said his 120 dogs are outside, off-leash three hours daily and get walks, massages and whirlpool baths. His income comes from winning, he said, and abused dogs are slow dogs.

He said the industry works to eliminate abusive trainers: "We police our own business -- if we see something, see anybody do anything at all wrong, ... they are out."

Sonia Stratemann, who has fostered more than 2,200 greyhounds over 15 years, has four former racers loping around her ranch, nuzzling visitors. One, Bart, has a back leg held together by screws. In a December race at Palm Beach, he was running second, video shows, when he clipped the leader's legs and went flying, spinning completely before crashing. Josephine has a jutting front leg from a break suffered in a 2015 race.

Flashing through photos of other injured, sick and tick-infested dogs, Stratemann said some trainers love their animals but others don't, and the business is dangerous to greyhounds.

"They are running 45 miles (72 kilometers) per hour; I don't see how you make that safer," Stratemann said.

Florida's Amendment 13 needs 60 percent approval to pass. Without the state, the sport may be too small to survive. Two tracks remain in West Virginia and one each in Alabama, Arkansas and Iowa. In Texas, three tracks rotate an annual meet.

Florida became the first state to legalize betting on greyhound racing in 1931. Some tracks dressed monkeys as jockeys and strapped them to dogs' backs but stopped after many died. Thousands, including celebrities like Babe Ruth and Frank Sinatra, turned out in its heyday.

It's much different today. At Palm Beach, the intense gamblers inhabit the track's poker room and surround simulcast screens after placing bets on horse races around the country.

The amount wagered on greyhound racing in Florida dropped from $1.5 billion in 1992, adjusted for inflation, to just over $200 million in 2017, state records show. After paying bettors, purses and taxes, five tracks reported losses on the sport and the then-12 tracks' combined net revenue on live racing was $20 million. That's about a fifth their poker net.

Racing proponents say the state's figures are misleading for popular tracks that simulcast races to betting parlors worldwide because that revenue is not reported. Palm Beach telecasts races in 35 countries and 20 states. Spokeswoman Theresa Hume wouldn't disclose that revenue but said the track would take a hit if dog racing ends, even with poker and simulcast horse wagering.

"We are successful and profitable with greyhound racing and want to continue," Hume said.