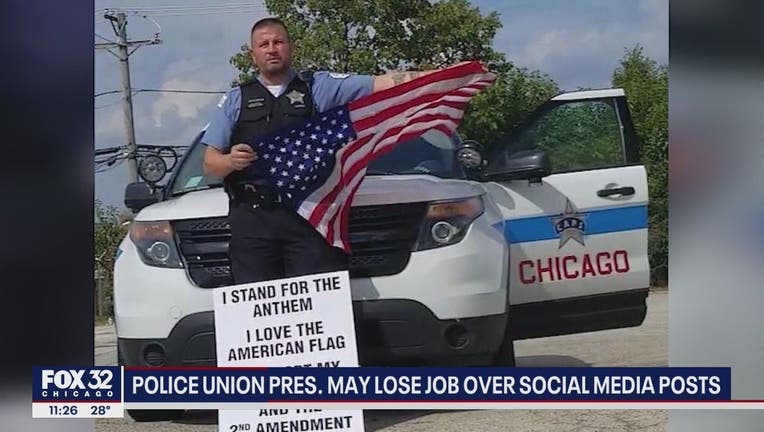 CHICAGO - The president of the Chicago police union was suspended on Wednesday from the Chicago Police Department and is in a no pay status, pending the outcome of his case before the Police Board, CPD said.

On Jan. 26, the Superintendent of Police filed with the Police Board charges against Police Officer John Catanzara alleging multiple rule violations stemming from statements on social media and other acts. The charges recommend that Catanzara be discharged from the Chicago Police Department.

"On or about November 22, 2016, Officer John Catanzara made a statement on Facebook that used offensive language and advocated killing people, by stating, 'Wtf its (sic) seriously time to kill these m-----f------,' refering to a story about a Wayne State University police officer who had been shot with the suspect still at large," the charges read.

According to the charges, Catanzara also made a statement on Facebook that encouraged other members of the department to stop chasing offenders.

The Board’s process for handling disciplinary cases includes an initial status hearing followed by discovery, a pre-hearing conference, and then presentation of witness testimony and evidence at a hearing, which will be open to the public, the city of Chicago's website says.

In December, the chief administrator of the Chicago Police Board recommended firing Fraternal Order of Police President John Catanzara because of more than a dozen posts from 2016 to 2018 where he is accused of being obscene, threatening and disrespectful to the Chicago Police Department.

One of the social media posts was a photo Catanzara posted of himself in his CPD uniform in support of President Donald Trump and the American flag.

"Effective February 10, 2021, in adherence with standard protocols, Officer John Catanzara was suspended from the Chicago Police Department and is in a no pay status pending the outcome of his case before the Police Board."

More information on the charges filed against Catanzara can be found here.