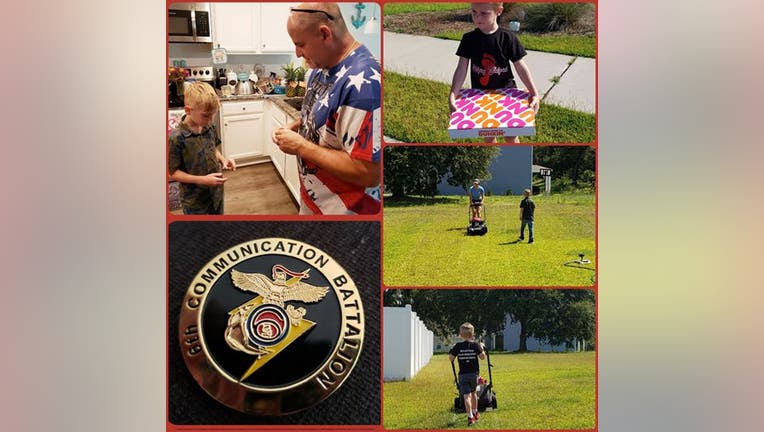 The biggest yard and the most special for Greyson, a Marine veteran.

A South Carolina fourth-grader who dreams of becoming a U.S. Navy SEAL is starting by helping local veterans.

In a Saturday interview on "Fox & Friends Weekend," Greyson Winfield and his father Greg explained that they started Helping Footprint -- their mission to serve their community -- because it was the “right thing to do in times of need.”

Working with his brother Garrett, the selfless 8-year-old collects gift cards to help those who need food, prepares small meals for other kids, and renders other considerate services.

According to WMBF, he mowed his fifth yard Tuesday for a 20-year Marine Corps veteran. The veteran, Ron Linke, has a bad back and diabetes.

"It’s pretty amazing. He’s a real special guy," Greg said. "Helping Footprint -- that he came up with pretty much on his own. You know, me and mom helped him with it a little bit. But, he’s a pretty amazing kid."

"I couldn't be prouder of him," added the older Winfield.

"But to think that your son, at that age, has that kind of ambition: what in his life or what in your parenting brought him that way?" asked "Friends Weekend" host Pete Hegseth.

Winfield explained that he works at a 911 call center in Conway, S.C. and that both he and his wife worked as volunteer firefighters when the family lived in New Jersey.

"So, I guess it runs in the blood," he remarked.

"But, even at a young age, we noticed that he was a helper," Winfield noted.

"[Greyson], at 4-years-old, was starting to give away toys at Christmas time because the answer we got [was] ‘well, there are some kids that don't have a lot like us, Dad. So, we want to be able to help them so they can have Christmas,'" he recalled.

Helping Footprint is accepting donations via their Facebook page. Greyson's parents also told WPDE they will be giving out gift cards to help others during the pandemic.