Border Patrol on Wednesday released a shocking video of smugglers abandoning a 5-year-old girl and a 3-year-old girl at the border in the New Mexico desert in the middle of the night -- after dropping them over a 14-foot border barrier.

A photo, exclusively obtained by Fox News, shows the two little girls -- who were dropped from a border barrier at the U.S. border by smugglers, and whose plight drew national concern and outrage -- receiving care at a Border Patrol facility after their rescue.

The photo shows El Paso Sector Chief Patrol Agent Gloria Chavez giving the girls a snack inside the El Paso processing center. The 5-year-old and 3-year-old had been rescued in Santa Teresa, New Mexico, after smugglers dropped them down the barrier and tossed belongings after them. 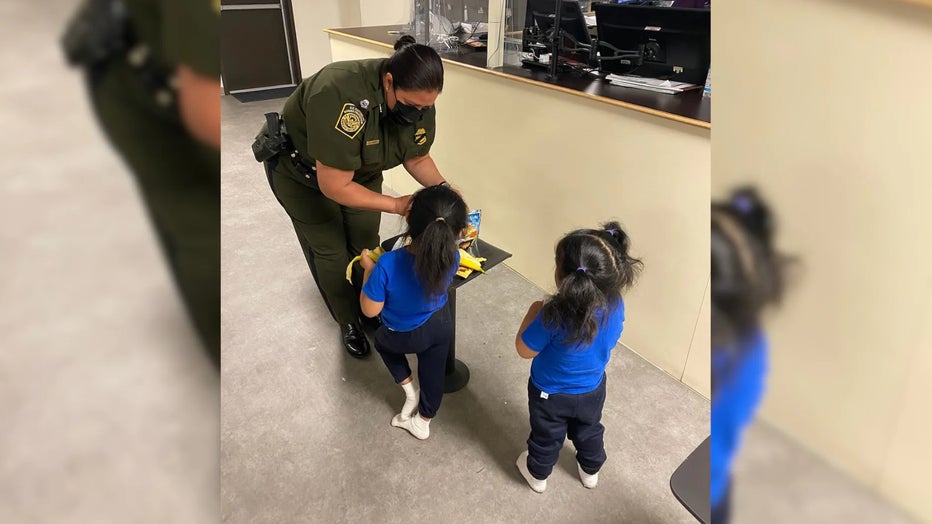 Chavez on Wednesday released the shocking video of their abandonment in the middle of the night. The two smugglers are seen fleeing from the southern side of the fence.

Chavez said the little girls were left "miles from the nearest residence." They were picked up by agents after they were spotted via surveillance technology.

She told "Your World" on Thursday that the girls are now "doing fine" and are "so resilient."

"I was really horrified and appalled and worried when I first saw the images come through from my staff," Chavez told host Neil Cavuto. "When I saw that first child dropped to the ground and then not see her move for a few seconds, I honestly thought this child just probably hit her head and is unconscious. And then I see the second child and immediately DHS, obviously, within a few minutes responded to that area to rescue them."

"When I visited with these little girls, they were so loving and so talkative, some of them were asking the names of all the agents that were there around them, and they even said they were a little hungry," Chavez recalled. "So I helped them peel a banana and open a juice box and just talked to them. You know, children are just so resilient and I'm so grateful that they're not severely injured or [have] broken limbs or anything like that."

The number of UACs has been rising for weeks, with the administration opening centers in an effort to house them. Customs and Border Protection (CBP) estimates that as many as 184,000 unaccompanied migrants could cross the border in fiscal year 2021, sources say.