CHICAGO - When Super Bowl 54 kicks off Sunday night on FOX 32, most Chicago fans really will not have a rooting interest in either team.

But there are several local players on both teams that all of Chicago will be pulling for.

“I got the rooms, I got the tickets all set. Now, I don't need one of the tickets,” Carl said.

That's because his son Nick Allegretti -- a rookie guard for the Kansas City Chiefs -- will be getting in for free.

“I was so excited for him to get drafted and to get drafted to such a great team, the Chiefs, and to see him play. But the thought of this never even crossed my mind,” said mother Tammy.

“I think the whole year has been surreal. If you think about the NFL, getting drafted into the NFL, that's the first step, then you have to make the team,” Carl said.

Nick is a true Illinois product. He began playing football in the peewee program that his father helped found in Frankfort. He went on to become to a standout at Lincoln-Way East, and then he played for Lovie Smith and the Fighting Illini. 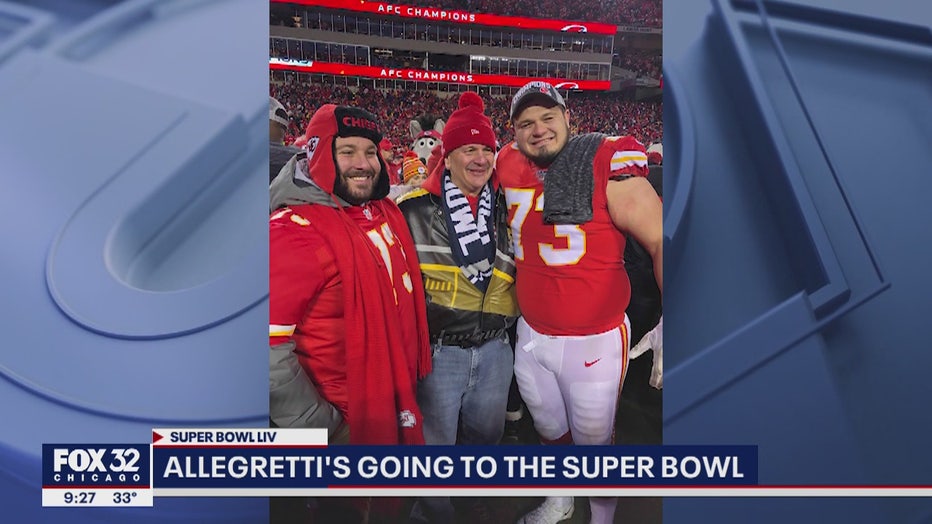 But one event changed the Allegretti family forever.

“Nick had to grow up at a really young age. At ten, his older brother Joey was diagnosed with leukemia,” Carl said.

The diagnoses came in 2007 when the family was on vacation to watch the Orange Bowl in Miami.

“That was the last time we were there. The very next time that we're all going to be together in Miami is this weekend [for] the Super bowl,” Carl said.

Nick watched his brother, best friend and now biggest fan fight for three years -- and when his dad couldn't be there for his first NFL game, it was his brother who flew out to cheer him on.

Their dad can't help but get emotional when he talks about the bond.

“You're only as happy as your unhappiest kid and when you see one achieve a lifelong dream and the other one be just as happy as he is, it's not about the game. It's about life,” Carl said.

The family will head out Friday to join Nick in Miami.

And in case you're still wondering about that extra ticket, well, it's been spoken for. It'll be going to the father of Nick's girlfriend.