Snow Moon will light up sky on February 27

Get ready for February’s full moon, nicknamed the Snow Moon, which will reach its peak and shine bright on February 27.

LOS ANGELES - Whether you’re still dealing with winter’s bitter cold temperatures or you’re starting to experience relief with warm sunny conditions, the moon will appear full to all sky-gazers this week.

Get ready for February’s full moon — nicknamed the "Snow Moon" — which will reach its peak and shine bright on Feb. 27.

Why is it called the Snow Moon?

February's full moon is known as the "Snow Moon" because it occurs at typically the time of year when the largest amount of snow falls.

According to data by the National Weather Service, February is on average the United States’ snowiest month. 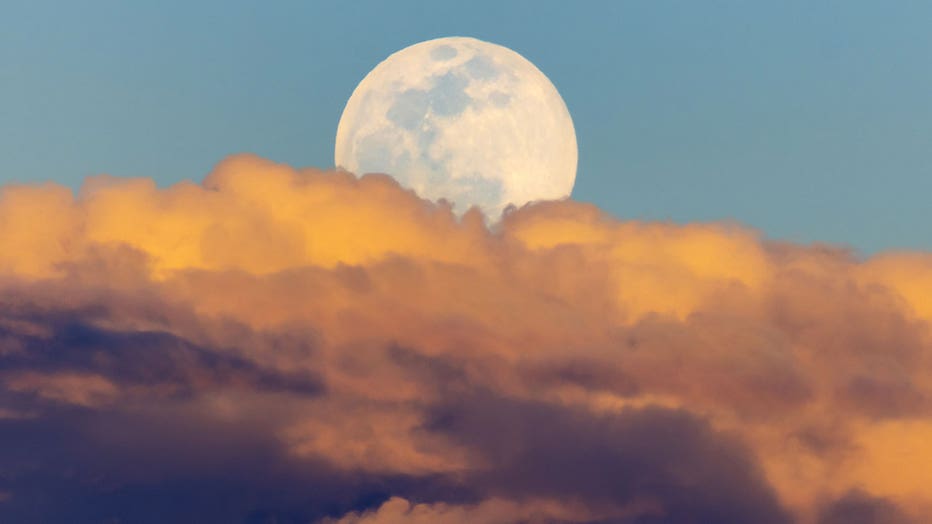 A snow moon from February 2019 is shown in a file photo. (Photo credit: Getty Images)

But the Farmer’s Almanac says that this full moon holds many other nicknames in different cultures.

For example, historically, heavy snow and harsh weather conditions made it difficult for hunting and trapping, so Native Americans often call it the "Hunger Moon," and the Cherokee tribe refers to it as the "Bone Moon," because food was scarce and hard to come by during this month.

Many of the moon’s nicknames have had a connection to animals.

RELATED: ‘Christmas star’: Jupiter and Saturn to align at closest distance in 400 years — here’s how to watch

"The Cree traditionally called this the ‘Bald Eagle Moon’ or ‘Eagle Moon.’ The ‘Ojibwe Bear Moon’ and ‘Tlingit Black Bear Moon’ refer to the time when bear cubs are born. The Dakota also call this the ‘Raccoon Moon,’ certain Algonquin peoples named it the ‘Groundhog Moon,’ and the Haida named it ‘Goose Moon,’" Space.com said.

When and where can you see the Snow Moon?

The full moon will reach its peak illumination at 3:19 a.m. ET on Saturday, Feb. 27, but the best viewing opportunity will be the evening prior, on Feb. 26.

Timelapse footage shot in Rhode Island showed the almost-full moon setting on February 26, as it changed from orange to pink behind Newport Bridge. (Credit: Mike Cohea via Storyful)

"From around the world these two nights – February 26 and 27, 2021 – the moon will likely appear full to the eye on both nights as it lights up the nighttime from dusk till dawn," EarthSky.org said.

According to Space.com, the full moon will drift above the horizon in the east around sunset and reach its highest point in the sky around midnight.

And as dusk turns to darkness on Feb. 26, EarthSky says you may even see a bright star pop our close the moon, which is Regulus, the brightest star in the constellation Leo the Lion.

A larger portion of the Eastern United States — spanning from the Southern U.S. up through New York — could be dealing with rain or snowy conditions Friday through Saturday, which could make for less favorable viewing conditions.

Sections of the Pacific Northwest may also battle wintry and wet conditions.

Meanwhile, the Southwest and Central U.S. are expected to remain dry, which could make for a better viewing opportunity.

Keep in mind, February nighttime low temperatures can still drop below freezing across a large section of the U.S., so make sure to bundle up if you are heading outdoors to watch this month’s full moon.