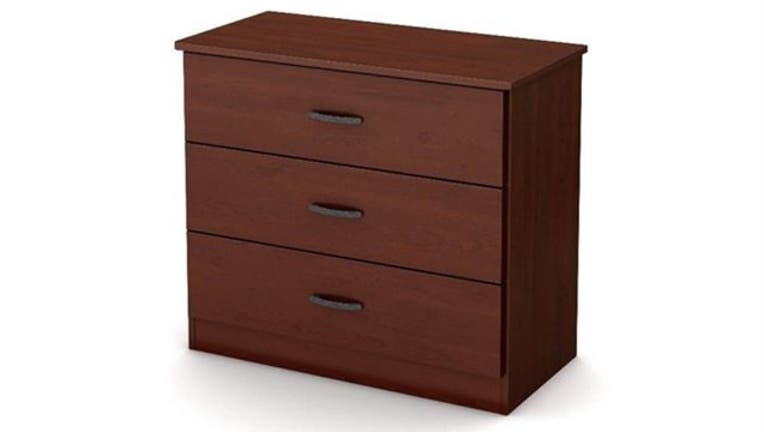 About 310,000 chest of drawers from South Shore Industries are being recalled because they are unstable if they aren't properly anchored to a wall, a recall notice from the CPSC said Thursday. (Consumer Product Safety Commission)

About 310,000 chests of drawers are being recalled after a 2-year-old reportedly died when an empty one tipped over.

South Shore Industries, Ltd., is recalling their Libra style 3-drawer chests because they are unstable if they aren’t anchored to a wall, according to a Thursday recall notice from the Consumer Product Safety Commission (CPSC).

The notice said the company received two reports of incidents involving the chests tipping over.

“One report stated that a child received bruises on his leg and scratches,” the notice said. “Another incident reported a fatality involving a two-year-old and an unanchored, empty 3-drawer chest.”

The chests were sold at online retailers including Walmart, Amazon and Target from October 2009 to July 2018 and cost about $60. Aside from the 310,000 units being recalled in the U.S., there were also about 6,900 sold in Canada, the notice said.

Some of the units were also sold as part of a three-piece bedroom set, which included a bed and nightstand — however, only the chests are being recalled.

The chests come in nine colors and each drawer has a metal handle. According to the notice, a model number can be found on a printed label on the back of the chest.

A full list of the recalled model numbers and colors can be found on the recall notice.

“Consumers should immediately stop using any recalled chest that is not properly anchored to the wall, and place it in an area that children cannot access,” the CPSC recommended in the notice.

The notice also listed a number of recall options to pursue after contacting South Shore including receiving a full refund with a free pick-up of the chest, mailing in drawer slides for a full refund or receiving a free tip-over restraint kit with a one-time free in-home installation.