On Thursday, Revolution Brewing will release a beer made from Garrett’s caramel corn.

CHICAGO - Popcorn and beer always taste good together. But in the same can?

Two iconic Chicago brands are joining forces to do just that.

On Thursday, Revolution Brewing will release a beer made from Garrett’s caramel corn.

Revolution brewer Jimbo Osenbaugh has brewed hundreds of different beers in his career — but their newest collaboration is as much alchemy as alcohol.

CaramelCrisp is the first beer ever made using Garrett’s popcorn, specifically the caramel corn that has Chicagoans and tourists standing in long lines.

After brewing a basic but tasty brown ale, Revolution brewers dumped 450 pounds of Garrett’s caramel corn into the mash.

"It was kind of fun," said Osenbaugh. "I was actually surprised. After it went into the mash it disappeared. You would never have been able to tell it was even in there." 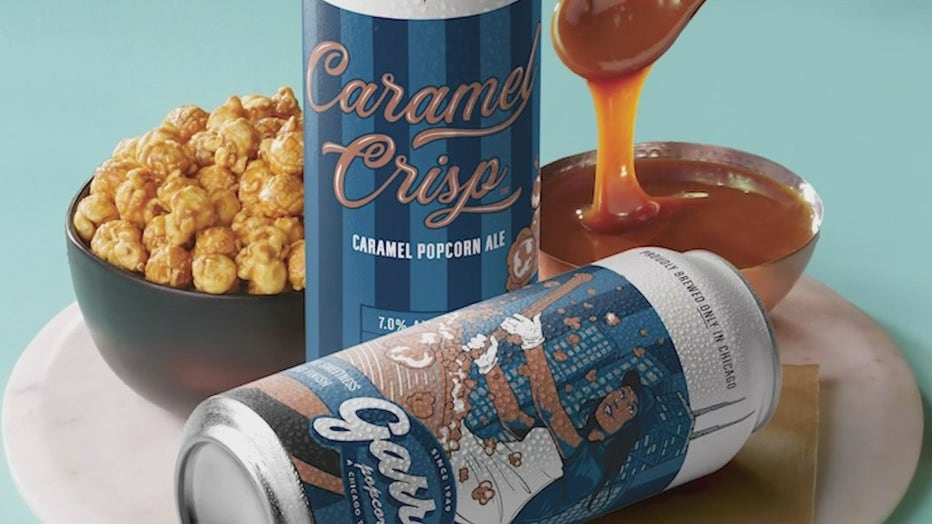 They also added a pinch of kosher salt to bring out the popcorn flavor.

The idea for marrying the two Chicago brand icons came about a year ago.

And it made sense because Garrett shares space with Revolution at its main brewery at Kedzie and Roscoe on the Northwest Side.

"We talked to their team. We brought them over for beers," remembers John Carruthers, a Revolution spokesman. "We explained a little bit to them how beer development works, and they explain to us how their popcorn is made."

After brewing a few experimental batches on a small pilot system they found a recipe that worked and scaled it up for mass production.

"So once we were able to dial in that base, when we hit it with all that other stuff it really came together," said Osenbaugh.

CaramelCrisp will be available at both Revolution tap rooms starting Thursday and should be on grocery and liquor store shelves throughout the Chicago area this week.

"When you have something you’re really excited about, and you put it out there and people are even more excited than you thought they’d be, that’s a great feeling."