Nearly all species of fireflies could soon face extinction

Habitat loss was the leading factor in the decline of the species while light pollution came as the second most serious threat to fireflies.

LOS ANGELES - A recent study warned that the nearly 2,000 species of fireflies in existence could soon face extinction from a variety of threats including habitat loss, pesticide use and light pollution.

The study, published in the Oxford Academic journal BioScience, said that while many insects have been negatively impacted by habitat loss, fireflies are particularly harmed by the threat because they rely on very specific conditions in order to complete their life cycle.

Habitat loss was the leading factor in the decline of the species while light pollution came as the second most serious threat to fireflies. Artificial light is so harmful to the highly charismatic bug known for its beautiful display of glowing lights.

Fireflies rely on “bioluminescent courtship signals” that are crucial for the continuation of their species, but their small lights are being dimmed by man-made light pollution.

Artificial light includes anything that illuminates and spreads from booming urban centers, such as street lights and commercial signs, and researchers noted that “more than 23% of the global land surface now experiences some degree of artificial night sky brightness.”

Researchers analyzed data from 350 members of the Fireflyers International Network, where threats to the insect were cataloged to better determine the factors involved in the species decline. They found that the threats depended on the region.

Crucial landscapes that once supported vital biodiversity are now being threatened by more and more people migrating away from big city centers. “In Japan, an iconic traditional landscape known as satoyama is disappearing in the face of development and rural out-migration,” the researchers wrote.

In Malaysia and much of Southeast Asia, the clearing of mangrove trees for palm oil plantations, shrimp farms and other human development has left those habitats unsuitable for Pteroptyx tener fireflies.

The Amazon Rainforest in South America boasts a high biodiversity of firefly species, but researchers say it is the most threatened and fragmented rainforest worldwide. 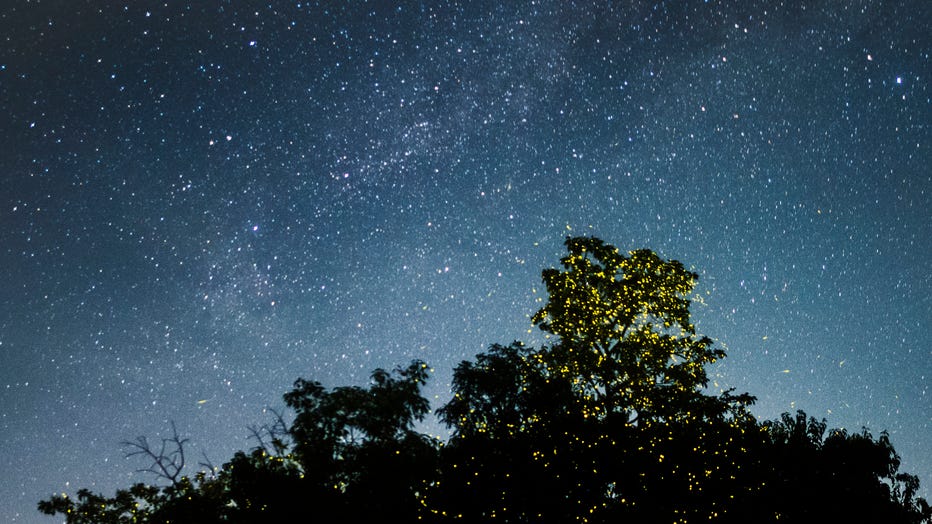 FILE - Fireflies light up on the trees on June 3, 2019 in Bhandardara, India.

While no specific time frame was predicted regarding the ultimate decline of the firefly species, a study published last year titled, “Insect declines and why they matter,” detailed a grim future for insect populations worldwide.

Calling it the “unnoticed apocalypse,” researchers said that 41% of all insect species are threatened with extinction.