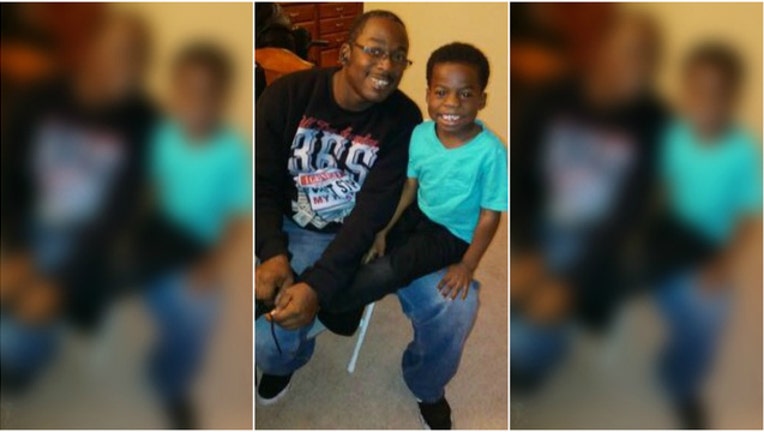 (SUN TIMES MEDIA WIRE) - Tyrone Hardin was working a second job as a security guard for a railroad company Saturday to earn enough money to provide a nice Christmas for his family.

“He assured me it wasn’t dangerous,” his wife, Gwinette Oliver, told the Chicago Sun-Times. “He said the worst thing is ‘I might get chewed up by one of the coyotes that come up there.'”

She agreed, as long he did not work overnight shifts.

But on Saturday, Hardin, 38, of Merrillville, Ind., was shot and killed while working in a Canadian National Railway yard in Harvey — where he crossed paths with a gunman who’d just crashed a car that he’d stolen minutes earlier.

The incident began after 4 p.m. when a woman called police in Harvey after she saw a man steal her car from a gas station at 159th and Halsted. She was able to get in another car and follow the man while speaking with police, who joined the pursuit, said Harvey city spokesman Sean Howard.

After hearing sirens and realizing he was being followed, the man crashed near 159th Street and Park and ran up a rocky incline of a nearby railroad viaduct where he encountered Hardin in his vehicle, according to Howard and Canadian National spokesman Patrick Waldron.

The man fatally shot Hardin in the abdomen and stole his truck, Howard said. The truck was later found abandoned in the 100 block of 171st Street in East Hazel Crest. Hardin was pronounced dead at 6:25 p.m. at South Suburban Hospital.

At a Sunday news conference, Howard pleaded with the gunman, who is presumed armed and dangerous, to surrender.

“Please turn yourself in. Let’s do it peacefully. We don’t want anything challenging right now. Enough people have been hurt.  .  .  . There’s no way you’re going to get away with this.”

Howard described the suspect as an African-American male of medium build and medium height, who wore a black sweatshirt with blue jeans.

“We’ve got some outstanding leads,” Howard said, adding that detectives have been aided by surveillance video.

As the manhunt continued, Hardin’s wife was left in a state of disbelief.

Hardin had a 5-year-old son with Oliver and was stepfather to her four other children. He also had a son from a previous marriage.

“I just want whatever person who did this to come forward because they done messed up everybody’s life. Now you have children growing up without a father, and a wife who’s too young to have to do this.”

Hardin’s regular job, she said, was working as a security guard in the subdivision community in Merrillville where the couple lived.

Hardin worked infrequently for the railroad company, she said.

“He always texted me before he took an assignment to ask if I’d feel comfortable with it,” she said.

“He didn’t think it was a dangerous. He was doing this for the extra money so we could give these kids a good Christmas.”

Oliver said police told her that the gunman hopped a gate into the rail yard and set off a security alarm, which drew the attention of her husband, who was on patrol in a truck nearby.

Waldron said Hardin worked for a security company that was contracted by Canadian National to assist railroad police in the yard in Harvey where he was killed.

“We would like to express our sincere condolences on this tragic loss to the guard’s family, friends and co-workers,” Waldron said in a statement issued Sunday afternoon.

Hardin was a caring father and husband, Oliver said.

“He was a good father to all my children in every way: birthdays, Christmas. He went to school functions if I had to work. He’d say, ‘Baby, don’t worry about it. I got it.'”

“He was just a wonderful person. He was funny. He was upbeat. He was caring.”

Stepdaughter Sharell Oliver, 26, said: “Even though he came into our lives late. He was there for us. … He still called me and gave me advice if I was going through something.”

Tamara Huzzie, a friend, said she spoke with Hardin two days ago.

“He said he spent Thanksgiving at his brother’s house in Oswego and had a ball,” Huzzie said. “He was young and doing his job, and I hope there can be a little justice for him.”

Hardin was a ham radio enthusiast who grew up on the far South Side and attended Carver Military Academy, Oliver said.

Oliver, who provides care to adults with mental disabilities, worked overtime on top of her overnight shift Saturday.

“I didn’t get a chance to see him Saturday morning like I usually do,” she said.

In one of their last conversations, she added: “We talked about going Christmas shopping.”