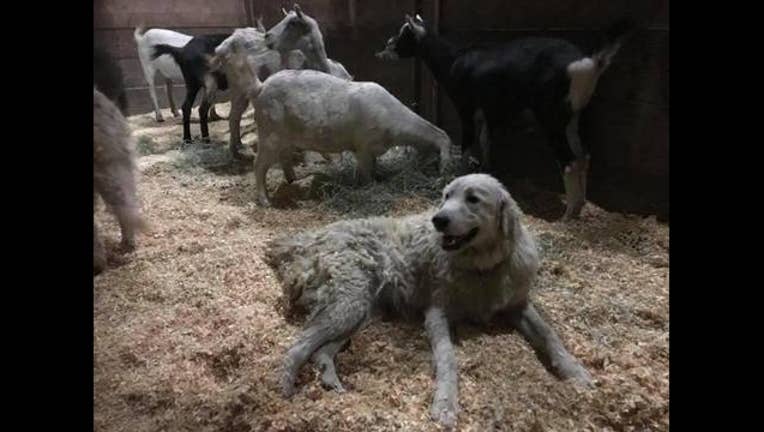 SONOMA COUNTY, Calif. (KTVU) - A 1.5 year old Great Pyrenees named Odin is being credited with saving eight pet goats from flames in the wine country fires, by staying behind and herding them to safety.

Roland Tembo Hendel tells KTVU, "The fire fight hit us first before any evacuation notices. We smelled smoke and there had been nothing on evacuations posted yet... I get all the alerts."

Tembo Hendel, who has experienced false alarms before, checked his property, which is located between Santa Rosa and Calistoga, for flames. He then headed up to his rooftop for a better vantage point.  "I went onto the roof and saw the sky turning orange." That's when a neighbor called him to report flames on their property. "My daughter had started loading up the dogs. It was time to go."

Odin, whose job is to watch over the small herd of goats, refused to leave. "He just sat down, looked me square in the eye - and he wasn't budging. I didn't have time to figure out what to do. He was determined to stay and he's his own being."

Tembo Hendel says he second guesses his decision - but Odin didn't give him much of a choice. "Hours later when we had found relative safety we cried for Odin and our goats. I was sure I had sentenced them to a horrific and agonizing death."

When Tembo Hendel made it back to his property he found his home gone, and a battered and burned Odin along with his eight goats named Tinkerbell, Aurora, Jack Sparrow, JoJo, Daryl, Peaches, Dixon and Amun-Ra. Several small, orphaned deer had also found their way to Odin, and remained safe under his care. "I started sobbing and my daughter and I... it didn't matter the house was gone and the structures - to find all our animals safe was all we needed."

Tembo Hendel will never know for certain what happened in those terrifying hours but he believes Odin herded the goats to a rocky area in their pasture. "His fur is orange so it's not damaged from flames... but heat. And the padding of his paws are burned."

This isn't the first time the goats have been saved. Tembo Hendel, a vegetarian, had purchased the goats for $4 from the Petaluma Auction. He says the goats were destined to be ground up as pig food before they became his pets.

Odin is now getting plenty of attention and TLC. He's set to get a full cooked steak dinner Monday, as well as a professional grooming session.

Find the You Caring page for Odin and the goats here.