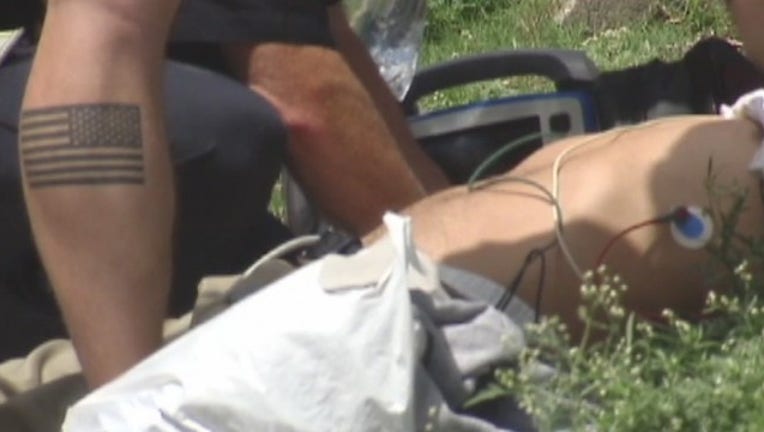 ST. LOUIS (AP) — The nation's homeless are proving to be especially susceptible to a new, dirt-cheap version of synthetic marijuana, which leaves users glassy-eyed, aimless, sprawled on streets and sidewalks oblivious to their surroundings or wandering into traffic.

Nearly 300 homeless people became ill last month in St. Louis due to the man-made hallucinogen that experts believe is far more dangerous and unpredictable than the real thing. Other outbreaks have occurred in New York City, Los Angeles and Austin, Texas.

"It was common for us to see reactions where they were violent, incoherent, sometimes catatonic on the ground," Austin police Lt. Kurt Thomas said.

The homeless are easy targets in a confined area, experts say. The drug is cheap — as little as $1 or $2 for a joint — more difficult to detect in drug tests and is a fast escape from a harsh reality.

Things got so bad in St. Louis last month that the region's largest provider of homeless services urged people to stop giving the homeless handouts, because they were worried the money would be used to buy the drug.

The Rev. Larry Rice saw the odd behaviors from several homeless people in the streets outside his New Life Evangelistic Center shelter in downtown St. Louis.

"They told me, 'You get so low, you get such a sense of hopelessness. Somebody wants to sell this for a dollar and you take it,'" Rice said. "People are desperate out there."

Synthetic marijuana has been around since the late 2000s, packaged under names like K2, Darkness and Mr. Happy. The Drug Enforcement Administration says it is usually a mixture of herbs and spices sprayed with a synthetic compound chemically similar to THC, the psychoactive ingredients in marijuana. It is typically manufactured in China and sold in places like head shops, but it's also on the street and over the internet.

State legislatures have outlawed it based on its chemical makeup, but the makers tweak the formula enough that it escapes the provisions of the law. So far in St. Louis, only one charge has been filed — a homeless man accused of selling to others on the street.

"You factor in some of the despair or difficult circumstances that these folks are going through, and they often fall prey to the suppliers offering an outlet to deal with their unfortunate situation," Thomas said.

The medical dangers are real with synthetic marijuana, which can be up to 100 times more potent than real marijuana, said Dr. Anthony Scalzo, director of toxicology for the Saint Louis University School of Medicine.

Research published last year in the New England Journal of Medicine indicated that 20 deaths from August 2011 through April 2015 were blamed on synthetic marijuana, though that doesn't account for overdose deaths of undetermined or multiple causes. Scalzo said those who survive can suffer permanent kidney failure and brain damage.

"We have no idea how the body is going to react to the next wave of chemicals," Scalzo said. "It's like Russian roulette. You just don't know what you're getting."

During one outbreak in Brooklyn in July, 130 people were hospitalized. Witnesses said many of users were shaking or leaning aimlessly against trees and fire hydrants.

In emergency room interviews, users said they would prefer to smoke real marijuana but took the synthetic drug to avoid detection in urine tests typically mandated for probation and parole issues and other reasons, according to Michelle Nolan of the New York City Health Department.

The Skid Row area of downtown Los Angeles saw the scourge over a few days in August, when 36 people were treated for overdoses. Some had seizures, others staggered through traffic or collapsed on curbs.

Around 150 homeless people have overdosed on synthetic marijuana since August in Austin, and one death was blamed on the drug, Thomas said. Police and homeless advocates in Austin are warning those on the street to avoid the temptation to use, but know it's an uphill battle.

"Being realistic, we're always going to have a group of folks who are willing to engage in self-destructive behavior," Thomas said.