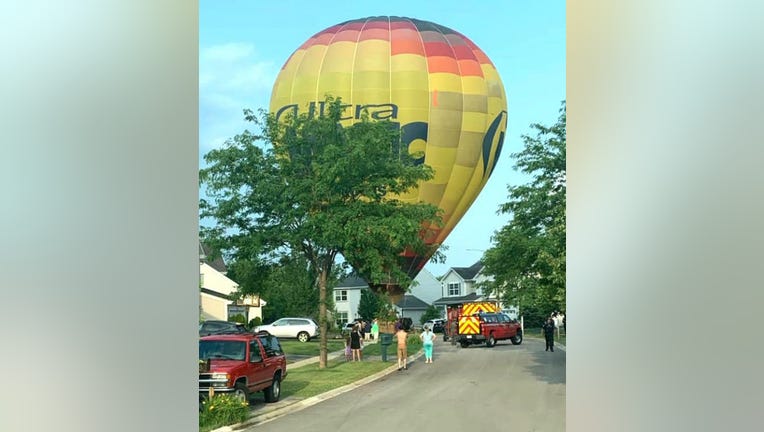 A hot air balloon landed on a Huntley residential street July 8, 2020, after someone onboard had a medical emergency.

A hot air balloon landed between two houses Wednesday morning in the northwest suburbs after a passenger had a medical emergency.

The pilot called authorities about 7:15 a.m. and said an 80-year-old woman on board had lost consciousness, according to Al Schlick, deputy chief of the Huntley Fire Protection District.

The pilot planned to land at Haligus and Ackman roads in Huntley, but the wind brought the balloon a couple blocks southwest, where it touched down between two houses in the 5500 block of Danbury Circle in Lake of the Hills, Schlick said.

The woman had regained consciousness by the time the balloon landed, and refused to go to a hospital, Schlick said. It’s unclear what caused her to pass out.

“She had no history of [losing consciousness]. She got lightheaded and then passed out,” Schlick said.

There were about five or six other people in the balloon when it landed, he said.

In his 33 years in Huntley, Schlick said he’s never seen a balloon land in a residential area for a medical emergency.

He commended the pilot for sticking a tough landing.

“He did an exceptional job,” Schlick said.