The charges, announced by House Judiciary Chairman Jerry Nadler, D-N.Y., stem from Trump's pressure on Ukraine to announce investigations of his political rivals as he withheld aid to the country.

"A president who declares himself above accountability, above the American people, and above Congress’ power of impeacment, which is meant to protect against threats to our Democratic institutions, is a president who sees himself as above the law," Nadler said while standing in front of a portrait of George Washington.

“We must be clear: No one, not even the president, is above the law.”

Speaker Nancy Pelosi, flanked by the chairmen of the impeachment inquiry committees, stood at the Capitol in what she called a “solemn act.'' 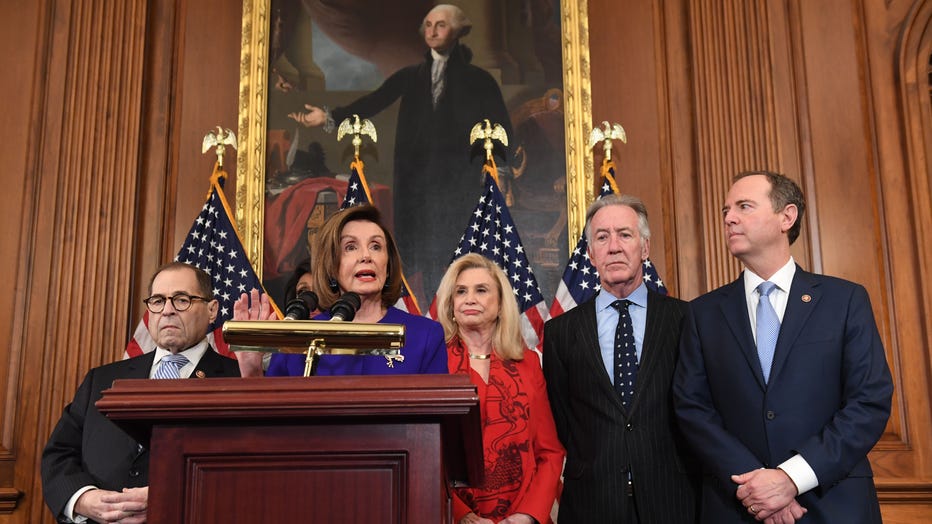 Voting is expected in a matter of days in the Judiciary Committee and by Christmas in the full House.

Trump swiftly responded on Twitter with the words he uses repeatedly to decry the investigations against him: “WITCH HUNT!” The White House said the charges were “baseless," and his reelection campaign called them “rank partisanship.”

In outlining the charges, Democrats said they had no choice but to act because Trump has shown a pattern of behavior that, if left unchecked, poses risks to the democratic process ahead of the 2020 election.

The move comes after the House Intelligence Committee heard lengthy testimony from current and former officials, both behind closed doors and in public hearings. The committee’s 300-page report of the impeachment inquiry released last week alleges that Trump misused the power of his office and, in the course of their investigation, obstructed Congress by stonewalling the proceedings.

Chairman Adam Schiff of the Intelligence Committee said Tuesday, “We stand here today because the president’s abuse of power leaves us with no choice.”

In the nearly 10-hour hearing at the Judiciary Committee on Monday, Democrats said Trump’s push to have Ukraine investigate Joe Biden while withholding U.S. military aid ran counter to U.S. policy and benefited Russia as well as himself.

Dan Goldman, the director of investigations at the House Intelligence Committee, presented the findings of the report.

“President Trump’s persistent and continuing effort to coerce a foreign country to help him cheat to win an election is a clear and present danger to our free and fair elections and to our national security,” said Goldman.

Republicans rejected not just Goldman's conclusion of the Ukraine matter; they also questioned his very appearance before the Judiciary panel. In a series of heated exchanges, they said Schiff should appear rather than sending his lawyer.

Democrats say Trump abused his power in a July 25 phone call when he asked Ukrainian President Volodymyr Zelenskiy for a favor in investigating Democrats. They say that was bribery since Trump was withholding nearly $400 million in military aid that Ukraine depended on to counter Russian aggression.

In drafting the articles of impeachment, Pelosi faced a legal and political challenge of balancing the views of her majority while hitting the Constitution's bar of "treason, bribery or other high crimes and misdemeanors.“

Nadler was blunt as he opened Monday’s hearing, saying, “President Trump put himself before country.”

Rep. Doug Collins of Georgia, the top Republican on the committee, said Democrats are racing to jam impeachment through on a “clock and a calendar” ahead of the 2020 presidential election.

“They can’t get over the fact that Donald Trump is the president of the United States, and they don’t have a candidate that can beat him,” Collins said.

Trump is the fourth president in history to face the threat of impeachment.

Approval of the charges would send them to the Senate in January, where the Republican majority would be unlikely to convict Trump.