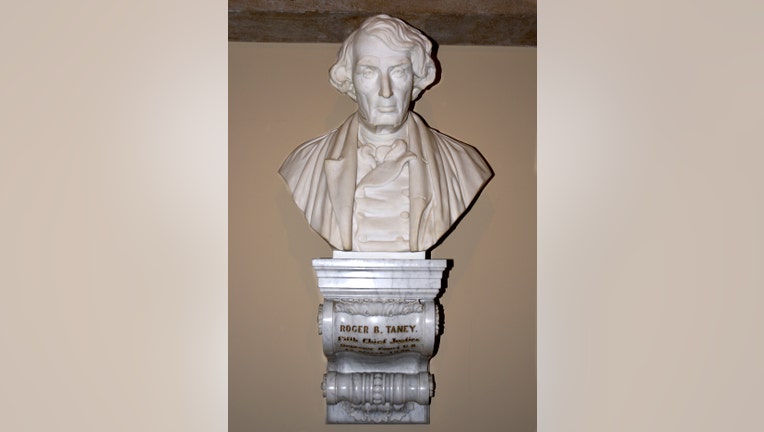 WASHINGTON, D.C. - APRIL 19, 2018: A marble bust of Roger B. Taney, former Chief justice of the U.S. Supreme Court, is on display in the Old Supreme Court Chamber in the U.S. Capitol in Washington, D.C. The bust was sculpted by Augustus Saint-Gaudens

WASHINGTON - Democrats on the House Appropriations Committee on Monday released a draft of a funding bill that includes a provision to remove statues and busts of those who served in the Confederacy or have "unambiguous records of racial intolerance" from the U.S. Capitol, setting up a potential fight over the issue as President Trump emphasizes preserving such tributes in at least some circumstances.

The bill, which provides more than $4 billion to fund the legislative branch as part of the fiscal year that begins in October, is almost certain not to pass in its current form due to how Congress has run its appropriations process in recent years. But it could serve as a template for continuing resolutions that keep the government running, and the statue-removal provision could make its way into that legislation.

"The bill includes language directing the Architect of the Capitol to remove statues or busts in the U.S. Capitol that represent figures who participated in the Confederate Army or government, as well as the statues of individuals with unambiguous records of racial intolerance, Charles Aycock, John C. Calhoun, and James Paul Clarke, and the bust of Roger B. Taney," an online summary of the bill reads.

Aycock was a federal prosecutor in North Carolina in the late 1800s and was elected that state's governor in 1900. But, due to his racist views, Duke University and East Carolina University have removed his name from residence halls in recent years, according to the Charlotte Observer. Calhoun was a vice president to Presidents John Quincy Adams and Andrew Jackson and fought in favor of slavery in a slew of other government positions he held in the early years of the republic.

Clark was a senator from Arkansas who supported white supremacy. Taney was the chief justice of the Supreme Court who wrote the opinion in the Dred Scott case, which ruled that Blacks, free or otherwise, "were not intended to be" American citizens under the Constitution, a ruling that contributed significantly to the start of the Civil War.

According to the text of the bill, "Confederate" statues and busts would mean depictions of individuals who voluntarily served as part of the Confederate military, the military of a state while it was rebelling against the United States or anyone who served as a Confederate government official.

This would include, for example, Jefferson Davis, whose statue was donated by Mississippi. Davis commanded Mississippi's military forces after it seceded from the union and later was the president of the Confederacy.

Trump has explicitly defended statues of nearly universally venerated American Founders who owned slaves, like George Washington and Thomas Jefferson, who have come under fire by some on the far left. This includes more controversial figures who nonetheless played a significant part in American history, like Andrew Jackson and Christopher Columbus, and longstanding military tributes to Confederates like Fort Bragg and Fort Lee.

Trump has been less explicit on defending Confederate displays in other cases, and it's not clear Trump would oppose the specific provisions in the House bill. Trump did, however, defend monuments that "represent our History & Heritage, both... the good and the bad" in a tweet thread last month, implying he would support leaving up Confederate monuments that some protesters have torn down amid recent racial unrest.

The president last week issued an executive order providing for a national statue garden that would include a number of American founders, some who owned slaves, along with civil rights leaders like Harriet Tubman, Martin Luther King, Jr., Frederick Douglass, and Jackie Robinson.

But Trump on Monday sent a controversial tweet that argued the decision by NASCAR to ban the Confederate flag contributed to its "lowest ratings EVER!" which is not true -- the TV ratings for the sport have increased since it banned the flag.

Congress has made other efforts to purge Confederate tributes as well. House Speaker Nancy Pelosi, D-Calif., removed the portraits of former House speakers who served the Confederacy last month and the Republican-controlled Senate included a provision in a defense bill that would rename military assets -- including Fort Bragg and Fort Lee -- that are named after Confederates, prompting a veto threat from Trump.

States and municipalities nationwide also have introduced plans to remove Confederate tributes in recent weeks. And protesters and even some politicians have advocated removing tributes to American presidents who are considered racially insensitive, including statues of George Washington and even Abraham Lincoln, who led the United States through the Civil War and issued the Emancipation Proclamation.