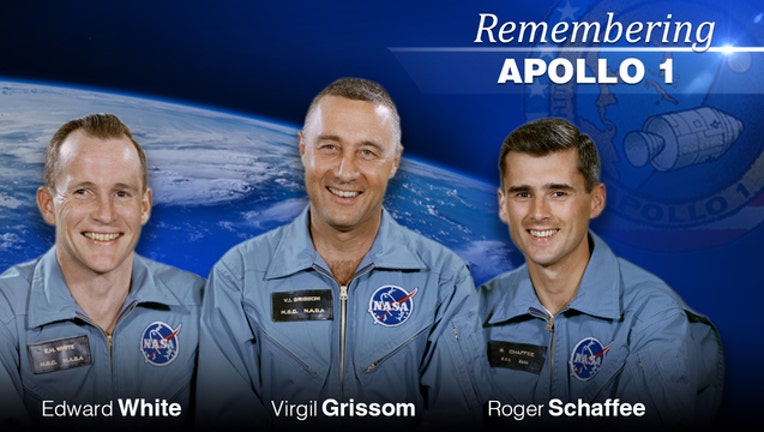 CAPE CANAVERAL, Fla. (AP) - Moonwalkers and dozens of others who took part in NASA's storied Apollo program paid tribute Thursday to the three astronauts killed in a fire 50 years ago.

On the eve of the Apollo 1 anniversary, hundreds gathered at Kennedy Space Center to honor Gus Grissom, Ed White and Roger Chaffee. They died during a countdown rehearsal at the launch pad, inside their burning spacecraft, on Jan. 27, 1967

On Friday, NASA is opening an Apollo 1 exhibit featuring the hatch that prevented the three astronauts from escaping. It has been concealed for the past half-century along with the capsule. The families of Grissom, White and Chaffee got an early look Wednesday evening at the display at the visitor complex, and liked what they saw.

"Really awesome," said daughter Sheryl Chaffee, who just retired from NASA. "It's very fitting. We all feel like it's about time."

The Apollo 1 fire — NASA's first space tragedy — has long been overshadowed by the 1986 Challenger and 2003 Columbia shuttle accidents. The 14 lost shuttle astronauts also were recognized Thursday, along with seven other U.S. astronauts killed in plane crashes.

The anniversaries of all three accidents fall within days: Apollo 1 on Jan. 27, Challenger on Jan. 28 and Columbia on Feb. 1.

Among the many astronauts attending Thursday's ceremony were the two surviving crew members of Apollo 11, Buzz Aldrin and Michael Collins, as well as Apollo 16 moonwalker Charlie Duke.

Collins, who orbited the moon in 1969 while Aldrin and Neil Armstrong landed on it, said Apollo 1 never launched, but in many ways was as important as later flights.

"Without Apollo 1 and the lessons learned from it," he noted, a fire probably would have occurred on a flight in space and seriously stalled the moon program.

"Yes, Apollo 1 did cause three deaths, but I believe it saved more than three later," he said. "It slowed things down for a year or so," but spacecraft improvements enabled Apollo missions to get going by the fall of 1968 and pick up speed.

NASA was able to meet the end-of-decade deadline set by President John F. Kennedy, to land a man on the moon and return him home safely.

"Grissom, White, Chaffee, Kennedy. I think these four names are appropriately mentioned in the same breath," Collins told the crowd.

"The Apollo crew was magnificent."