Hurricane Laura pounded Louisiana near the Texas border early Aug. 27 with heavy wind and torrential rain, unleashing a wall of seawater on cities in its path.

LAKE CHARLES, La. - Hurricane Laura toppled a Confederate monument in Lake Charles, Louisiana, just weeks after officials in the area had voted to keep the statue.

The Calcasieu Parish Police Jury, which is similar to a county commission, voted Aug. 13 to leave the South’s Defenders Monument on the grounds of the courthouse, according to the local American Press newspaper. 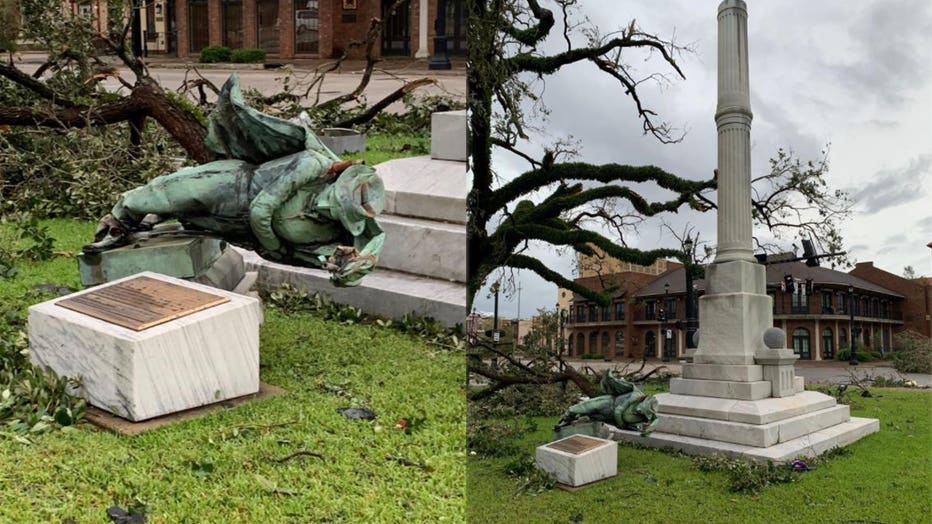 Calcasieu Parish Administrator Bryan Beam said at the time that the parish had received 945 written responses about the monument since June. Louisiana is divided into 64 parishes, rather than counties.

The statue was dedicated in 1915 to recognize local Confederate veterans who fought in the Civil War, along with other soldiers from various towns in the South, according to the newspaper. The South’s Defenders Monument featured a young soldier on a pedestal looking out over the lawn of the Calcasieu Parish Courthouse.

The statue had been a topic of discussion in previous years, but it became the center of a renewed debate following George Floyd’s death at the hands of Minneapolis police in May.

And then, the Category 4 storm made landfall early Thursday, battering the Gulf Coast shoreline with heavy wind and torrential rain. Photos of the aftermath on social media showed the soldier lying on the ground at the base of the monument with broken tree branches strewn around it.

After bringing widespread damage to parts of Louisiana and Texas, Laura was later downgraded to a tropical storm by Thursday afternoon — moving on to parts of southern Arkansas with powerful winds and rainfall.

Louisiana Gov. John Bel Edwards said state officials knew of at least four deaths tied to the hurricane, caused by trees falling on residences. The storm also left behind hundreds of thousands of power outages, flooding, and damage to numerous buildings and homes throughout the area.