It's been five years since a treatment for Batten disease originated in the Chicago suburbs. The rare disease affects young children, paralyzing toddlers as they grow.

KANKAKEE COUNTY - It's been five years since a treatment for Batten disease originated in the Chicago suburbs. The rare disease affects young children, paralyzing toddlers as they grow.

The treatment is not a cure, but it is already providing tremendous hope for another local family.

What are the odds that two Chicago-area families would have children diagnosed with the same rare disease?

For the VanHoutan's, the miracle treatment came too late. But without their fight, the Beedle family wouldn't be where they are today.

In Kankakee County, Annabell and Abigail Beedle are living proof of another family's persistence. The sisters both have the gene that triggers CLN2 Batten disease. Both are being treated with a brain enzyme that slows and blocks the effects of the disease.

"This treatment is an absolute miracle and the VanHoutan family, their persistence their dedication, their passion to see this project through is remarkable. They are true pioneers," said Amanda Beedle.

Before the Beedle girls were born, in Downers Grove, the VanHoutan family was waging a war against the same disease that many knew nothing about.

"When you start to read what is going to happen to your child, you're in just a real state of disbelief," said Tracy VanHoutan.

At the time, there was no treatment.

"You just can't believe that something like this can happen to little kids," Tracy said.

Noah's little sister, Laine, also had the CLN2 gene. Her twin sister Emily did not.

After Noah’s diagnosis, the VanHoutan's founded Noah’s Hope — a nonprofit that raised $30,000 in less than two months to fund Rutgers University research for a cure.

The findings were then put to use by California-based BioMarin Pharmaceutical company.

"I think there's probably nothing we've done in the company, and I’ve been with the company for 10 years, that's captured our consciousness, our excitement, you know motivated us to do more than this program and this drug," said David Jacoby, Vice President of BioMarin Pharmaceutical. "It's given us a sense of purpose but also a sense of ambition about other things that we can solve as well."

On April 27, 2017, the first treatment called Brineura hit the market — thanks in part to the research funded by the VanHoutan's.

But it was too late for Noah and his sister Laine.

"Of course I would love to have my children here today, but if they can't be here they might as well be working their magic from above," said Jen VanHoutan. 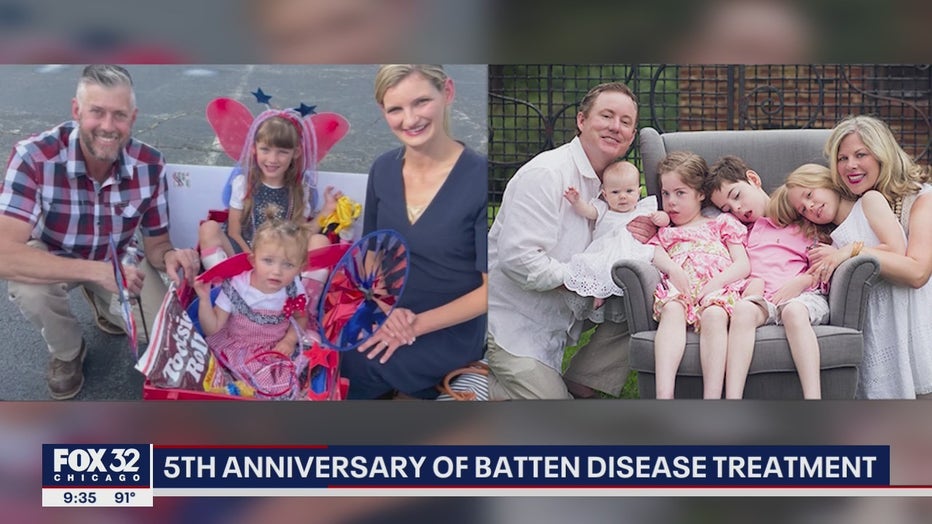 Two Chicago families, and two different outcomes. The same diagnosis, and the same hope for the future.

"For us, the future is measured in moments, the smiles, the laughs, the time spent together, and this treatment has afforded us so many more of those moments and for that, our hearts are forever grateful," said Amanda Beedle.

The VanHoutan's are currently working on a pilot program in New York state to develop a newborn screening for the disease.

Funds are being raised through Noah’s Hope and its sister organization Hope 4 Bridget — started by another family faced with Batten disease in Carpentersville, Illinois.